You are here: Home>Locations>Knowle>“Knowle Men” in the First World War 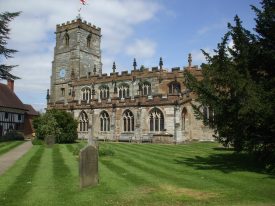 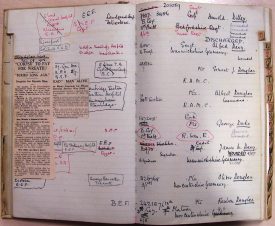 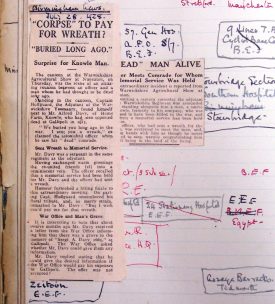 This register, entitled Knowle Men was kept by the Reverend Downing of Knowle Parish Church. It contains the names of every man from Knowle who enlisted in the First World War.

The details of each man are spread across two pages. The notes show their names, regiment and number, addresses of hospitals they were treated in, and if they won any medals or were mentioned in despatches.

Rev. Downing recorded what happened to each man, including each time they were injured and returned to war. Many of the men have ‘wounded’ next to their names, while others are listed as ‘missing’, ‘sick’, ‘frost bitten’, ‘gassed’ and ‘killed’.

Thomas William Downing was the Vicar of Knowle between 1901-1932. He had a keen interest in ancient parochial documents, leading him to compile the book, The Records of Knowle, which was published in 1914.

Downing was revered for keeping the spirit of village life alive through his work in the community. This was especially prevalent during the war. Examples of his contribution included organising packages of cigarettes to be sent to the soldiers and helping a group of Sunday school children send Christmas cards to those serving on HMS Black Prince. Downing also played a part in the creation of the Soldiers Chapel in Knowle Church. This is a memorial to the 80 men and one woman from Knowle who died during the war.

Stories from the register

The register brings out some fascinating stories, helped by Rev. Downing’s use of newspaper cuttings and letters to supplement the records.

This page shows the record of Alfred Davy. Davy, of the Warwickshire Yeomanry, was seen to be shot in the head during an attack on the Dardanelles and was reported killed in 1915. In fact, he was picked up unconscious and sent back to England, and although his parents were informed he was alive, the War Office believed him to be dead. Wreaths were even sent to the war cemetery in Gallipoli, where there was a headstone for him. The newspaper cutting tells of the moment Davy met a friend at an agricultural show in 1928, who was unaware of his survival.

A letter from the Imperial War Graves Commission, 16th October 1931 inserted in the register tells of Captain Ludlow, 8th Battalion, Royal Warwickshire Regiment. Ludlow was listed as missing on the Thiepval Memorial (a memorial to mark those lost in the Battle of Somme with no known grave). The letter states that an identity disc and personal items (including a gold ring and gold horse shoe charm) had been found with his body, so Captain Ludlow’s burial place could finally be identified. He was reburied in Serre Road Cemetery and is memorialised in a stained glass window in Knowle Parish Church.

Linkedin
More from Knowle
More from World War One