You are here: Home>Locations>Meriden>Meriden's Cycling Memorial 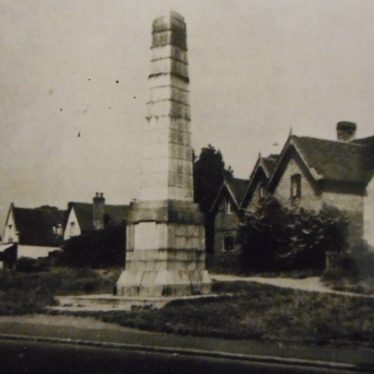 The National Cyclists' Memorial in Meriden as it appeared in the first half of the century, complete with cyclist.
Warwickshire County Record Office reference PH1035/C8082 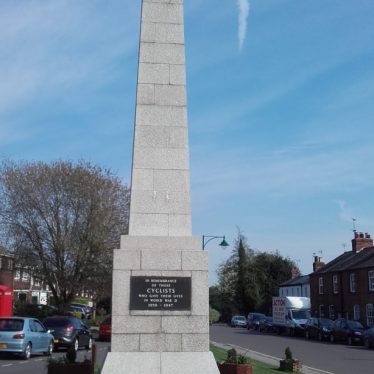 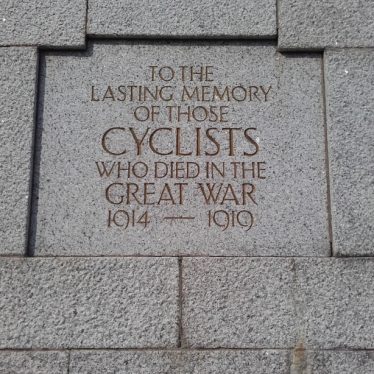 The dedication on the Cyclist Memorial, Meriden
Photo courtesy of Rachael Marsay

While most people know that Meriden has a long-standing claim to be at the very heart of England, perhaps fewer are aware it is also home to the National Cyclists’ Memorial, built to remember those cyclists who died in World War One.

The memorial was unveiled by the then Lord Chancellor, Lord Birkenhead, on 21st May 1921 and the inauguration attended by over 20,000 people.  Since then there has been a service of remembrance held in May every year when a few hundred cyclists make their way to Warwickshire to pay their respects.

Purchased with donations from cyclists all over the country, including one from Edward VIII (then Prince of Wales) who auctioned his own bike to raise money, the Cornish granite obelisk was placed in Meriden to give the nation’s bike riders an equal opportunity to visit.  It was awarded Grade II Listed status in 2001.

On it’s first visit to Warwickshire on June 16th 2016, the the 2nd stage of the Aviva Women’s Tour passed by the obelisk, which was installed on the village green.