You are here: Home>Locations>Kenilworth>Kenilworth Castle: Phase 2 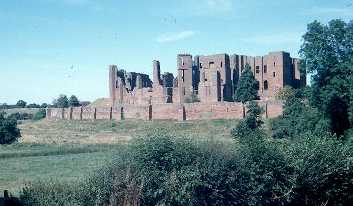 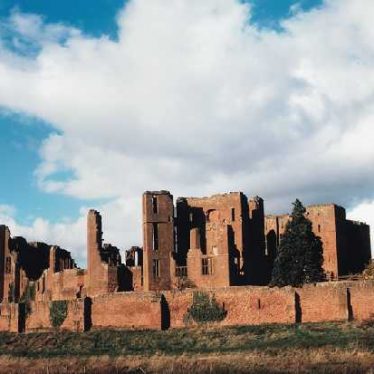 Phase two in the building of Kenilworth castle included the a great keep and a curtain wall with towers that were built during the mid to late 1100s and early 1200s.

1 The Norman keep could have been preceded by a motte and bailey castle (PRN 3200), although Chatwin thinks that this is unlikely. Chatwin suggests that the keep was constructed around 1122 by Geoffrey de Clinton. The keep is 24.4m by 19.2m, with large square projections clasping the angles, making it overall about 30m by 24.4m, and in height it was about 24.4m. It must have taken a very long time to erect. It may not have been completed in Geoffrey de Clinton’s lifetime. The exceptionally solid nature of the defences suggests a date later than the middle of the 12th century. During the construction of the keep it is likely that a circular enclosure of bank and ditch surmounted by a palisade was constructed. The present courtyard may occupy approximately the site of the bailey which probably developed from the palisaded enclosure.
2 The early castle consisted of a great keep which stood at the NE angle of a bailey. Under John the castle was surrounded by a curtain wall with towers. Detailed accounts exist of later buildings within the bailey.
3 Scheduled as Warwickshire Monument No 1.
4 Scheduling information.
5 The site was Re-Scheduled in 1996 as Monument No 21576.
6 A programme of resistivity survey and Ground Penetrating Radar Survey centred upon SP 280 722 recorded several anomalies which had a high potential to be of archaeological origin. These included high and low resistance area anomalies, complex ground penetrating radar responses and inclined events. Due to the small area of the survey the significance of these features is unknown and may require further investigation.
7 Noted, and documentary research conducted, as part of an archaeological resource assessment of the castle and surrounding features.
8 Observation of trenching adjacent to Leicester’s Gatehouse uncovered further evidence of a) the curtain wall to the east of the Gatehouse which was wider than had been seen in an earlier trench, and b) of the western face of the arch of the former moat bridge. Evidence was also found of previously unrecorded masonry features; a drain, a sandstone wall and another wall foundation, all probably predating the Leicester buildings.
9 Part of the curtain wall was recorded after collapse, so that it could be rebuilt as accurately as possible. The curtain wall was part of the 13th-century alteration to the castle’s defences and in the outer court areas. Domestic buildings would have once been contained in the outer court area as is evidenced by window and fireplace apertures of various dates in the wall. A survey of 1545 states that ‘about the walls there be houses builded for 200 persons to lodge in’.