You are here: Home>Locations>Maxstoke>Maxstoke Castle 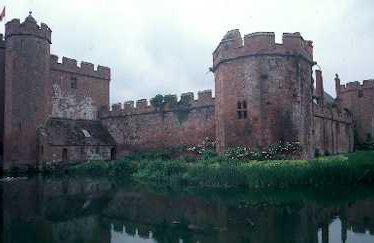 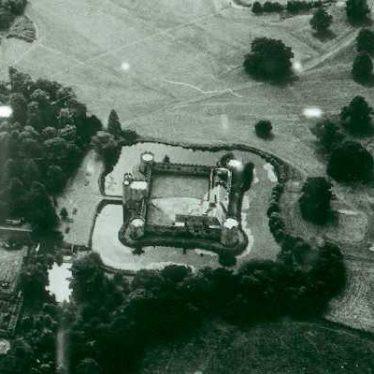 The remains of Maxstoke Castle, which was built during the Medieval period. It was situated 1km east of Castle Farm.

1 Sir William Clinton obtained licence to crenellate in 1346. The castle was built on a new site and a completely new layout was possible, and a perfectly symmetrical planned building was the result. It is rectangular, measuring about 55m from N-S and about 49m E-W. At each angle there is an octagonal tower 9m across, and in the centre of the E side is a gatehouse (PRN 351). The main building, of which part of the original walls still remain in the modern residence, was along the W side, and on the N and S there were subsidiary buildings, the evidence for which is to be seen in the corbels and other features on the main wall.
2 Castle partly remodelled by the Earl of Stafford a century after its construction.
5 1967: In excellent condition. 1976: A private residence maintained in excellent order. The castle has survived intact and the fabric has been skilfully restored so that it presents an outstanding example of its period.
6 A number of Medieval floor tiles from Maxstoke Castle were donated to Warwick Museum by P B Chatwin.
7 Descriptive text.
8 SAM List.
9 Photographed in 1977.
10 Archaeological recording of an extension to the Rear Hall at Maxstoke Castle revealed no new evidence for the medieval arrangements in this part of the building, although it appears that the masonry projection by the door through the curtain wall was post-medieval, rather than part of a medieval stair base. The main layer revealed was probably the surface left after the debris of the fire of 1762 had been removed.
11 Initiative from WM in 1977 to obtain more information about the Castle.
12 Scheduling information from 1981.
13 Scheduling information from 1982.
14 Correspondence from 1982 and 1983 relating to a new building on the site of the Great Kitchen.
15 Plans for the building proposed in 13.
16 Letter from the DoE in 1977 about a proposed new building at the Castle.
17 Undated large scale map of the Castle and surrounding area.
18 Partial scheduling information from 1983.