You are here: Home>Locations>Warwick>Warwick Castle, Phase I 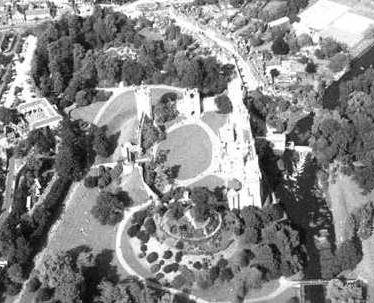 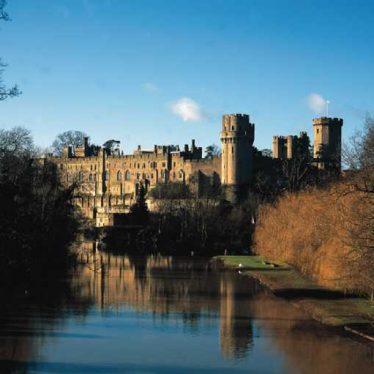 Phase I of Warwick Castle which was built from 1068 as a motte and bailey castle. It was first constructed in wood, but was rebuilt in stone possibly during the 12th century. It was at least partially enclosed by a moat.

1 A castle at Warwick was begun by William I in 1068 as part of a plan to safeguard the Midlands. This castle was of the motte and bailey type and stands on a sandstone bluff overlooking a bend in the Avon where the river has cut away the rock to form a cliff. Except on this side the walls which surround the bailey are protected by a moat. The area enclosed by the walls is about 128m from NE to SW and about 82m wide. The motte, on which a keep formerly stood, forms the SW end of the enclosure, but the most formidable defences, built in the 14th century, are at the NE end. Here a central gatehouse tower with a barbican outside is connected by high curtain walls to two great angle towers. To the N are remains of 15th century fortifications. The SE side of the former bailey is occupied by the domestic buildings, which are 14th century and later in date. The castle would originally have had a wooden palisade on the bailey and motte. Timber was replaced by stone, presumably from the 12th century onwards. The modern walls on the motte incorporate probable 13th century masonry. The domestic buildings were placed on the securest side of the bailey and included a church (PRN 1951). Various alterations and additions were carried out from the 14th century until modern times.
2 Plan.
3 Information in Pevsner.
4 Bailey obliterated by later remodelling, but present courtyard presumed to correspond to original shape.
7 Two reconstructions of the area around Caesar’s Tower c.1700 and c.1550.
8 Four small trenches were excavated on the north-east side of the mound to assess the archaeological impact of proposals to remodel and extend the existing pathway. A small quantity of 13th century material was found but the excavator decided that the proposed work would not damage archaeology.
11 An evaluation on top of the mound identified features contemporary with the earliest phase of the castle. Features included part of the plinth of the keep west wall. The construction trench for this wall contained 13th century pottery. During the Civil War the mound was built up as a gunning battery.
12, 13 Documentary and Pictoral Evidence of Warwick Castle Mound.
14 Documentary and Pictorial Survey of Watergate Tower.
15 Plans of Watergate Tower.
16 Photos of Watergate Tower.
17 Small scale excavation and recording were carried out on behalf of Warwick Castle Ltd in advance of building work for a new exhibition in the undercroft of the domestic range.
18 A series of trenches for floodlighting, computer cabling and replacement water mains were observed on behalf of Warwick Castle Ltd.
19 ‘Fulke Greville and Warwick Castle’ – report including plans and photos.
20 In 1995 an evaluation took place in advance of path construction immediately below and north of Caesar’s Tower. Four trenches were excavated. These revealed mostly 18th and 19th century features associated with the landscaping of the area, but also uncovered a foundation of Caesar’s Tower itself and provided evidence to suggest that the Medieval ditch was considerably wider and deeper than the existing one.
21 Site of Civil War siege, as discussed in ‘Edgehill and Beyond: The People’s War in the South Midlands 1642-45’ by Philip Tennant (1992). Approximately 2 weeks, musket ball holes in face of Guy’s tower (B. Gethin pers. comm.)
22 Visitor’s booklet on the grounds and garden.
23 Ground plan.
24 Correspondence from 1997.