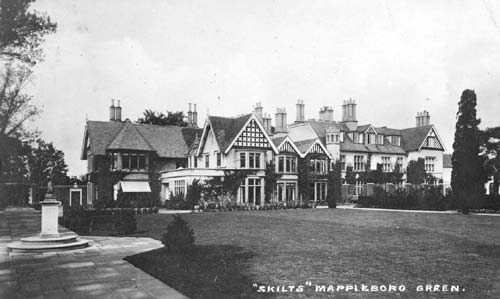 Upper Skilts garden, dating from the Imperial to the 20th century. The garden features include a drive, pergola, terraces, rose garden and a tennis court. It is located 700m north east of Mappleborough Green. Recommended for inclusion on Local List by Lovie. Listed Building Status for surviving wrought-iron gate, gatepiers and doorway through fruit wall recommended by Lovie.

1 Gardens laid out c1914 by T H Mawson around 1880s house (extended c1908) within area of former deer park. Features include lawns, terraces, walled garden, pergola, rose garden, lodge, drive, pleasure grounds and paddock park. House now a residential school and grounds in poor condition. Recommended for inclusion on Local List of significant parks and gardens.
2 Gardens commissioned c1910, and plans dated 1914 survive. These show enclosed gardens featuring rose and herbaceous plant beds on the terrace, lawns, tennis courts and a pergola. Photos of elaborate doorways in the enclosing walls survive [reproduced] and one doorway is still extant. The site has been used as a school in the later part of the 20th century, and much of the planting and hard landscaping has been lost. The site is already fragmented and surviving features, including a fine wrought iron gate, are in danger of being further neglected or sold. Recommends Listed Building status for some surviving structures.
3 The OS 1:10560 1887 Sht Warks 31NW shows the site soon after the construction of Upper Skilts House. A large, enclosed garden area is already visible .
4 The OS 1:10560 1905 Sht Warks 31NW shows a shaded area of parkland around the house; changes in field boundaries suggest that some of this had been taken into parkland since the 1887 map.

Linkedin
More from Studley
More from Buildings, Ruins and Town Walls
More from Domestic Gardens
More from Gardens and Allotments