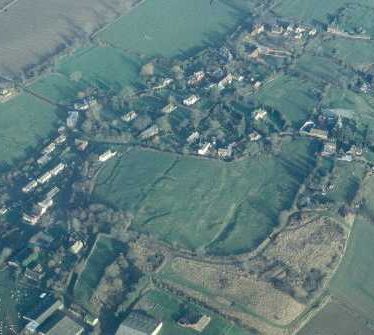 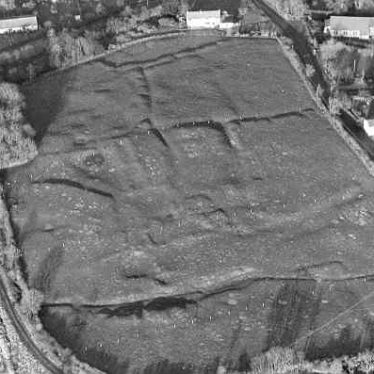 The site of a Medieval shrunken settlement, with four areas of desertion. House platforms, hollow ways, trackways, and a pond are visible as earthworks and on aerial photographs. It is situated to the west of Flecknoe.

1 Listed by Dugdale as the largest and chief village of Wolfhampcote. Dugdale also mentions a chapel (PRN 6372).
2 The area behind Flecknoe Farm at SP5163 contains house platforms, hollow ways, a pond and trackways. At SP5163 possible hollow ways, field boundaries and pits – possibly the result of quarrying – can be distinguished. Both of these are pastureland and the earthworks are still very evident.
4 Aerial photographs indicate that Flecknoe is a shrunken village. Four areas of desertion are evident within and on the edge of the modern settlement. Possible hollow ways, croft boundaries and building foundations are evident. In addition to the two areas recorded in reference 2 a third area is evident E of Flecknoe Farm at SP5163 and a fourth area at SP5163.
5 Another series of air photographs have recently been taken showing the surviving medieval settlement earthworks.
6 An area of the village adjacent to Manor Farm was evaluated in June 1992 in advance of a housing development (PRN 6406).
7 Watching brief during groundworks for a double garage revealed no archaeological features or finds.
8 Observation of the laying of pipe trenches for a new sewerage system in Flecknoe revealed medieval activity in the scheduled area behind Vicarage Road. A limestone surface, possibly associated with a building and a section of wall associated with a late Medieval building were found. Two boundary ditches, of 16th century date, and a number of ditches were also identified.
9 English Heritage scheduling revised August 4th 2003. Five areas identified. The monument includes buried and earthwork remains of the medieval settlement. The visible remains include the house sites and enclosures and associated hollow ways, field boundaries and enclosures as well as a sample of surviving ridge and furrow. They are well preserved. Evidence from a series of small excavations has found evidence of occupation levels from the Roman, Anglo Saxon, and medieval periods. The low lying water logged area to the northwest should contain preserved organic material.
10 A visit was made to the village following reports of damage being made to the medieval fishpond. A photographic record of the visit was taken, but the exact location of the alleged damage was unknown, and access to land was restricted. Nothing untoward however was observed.
11 Original schedule from 2000.