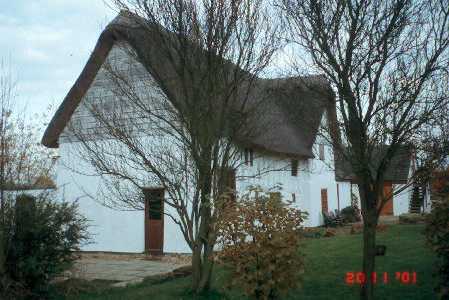 A hall house, a building comprising a public hall and private accomodation. It was built during the Medieval period and was a timber framed building. Alterations were made to it during the Post Medieval and Imperial periods. It is situated in Sawbridge.

1 Structural and social analysis of Hall House documenting its development from relatively modest beginnings in the early 15th century to a timber framed hall house of sophisticated structure and elegant decoration by circa 1500. In its heyday comprising a two-bay hall with additional in-line bay and two cross wings. Also its subsequent decline from the 17th century as changing family interests and architectural fashions relegated it to use as cottages for ‘paupers, labourers and widows’. Attendant structural modifications included the replacement of much of the framing with stone in the 17th century and brick in the 18th century & 19th century, the addition of a kitchen wing in the 19th century and the demolition of the south cross wing in the 20th century .
2 Archaeological evaluation undertaken as a pre-planning application (for a future extension) south of the house revealed the heavily truncated remains of a 19th century wing. This wing was built after 1850 – the house was put up to auction at this time and no wing exists – but it is shown on the Ordnance Survey 1st edition map of 1884. It appears to have been demolished in the mid-20th century. Two linear hollows noted in the lawn to the rear of the house may mark the line of a former east wing.

email
More from Wolfhampcote
More from Buildings and Structures (Parks and Gardens)
More from Farm Houses, Cottages and Manor Houses