You are here: Home>Locations>Stretton on Dunsmore>A Tudor House Moved From Stretton to Milton Keynes

A Tudor House Moved From Stretton to Milton Keynes 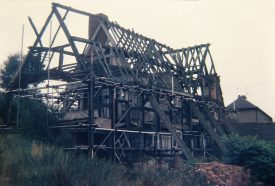 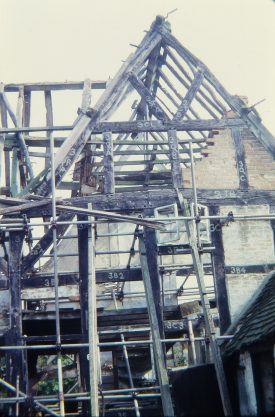 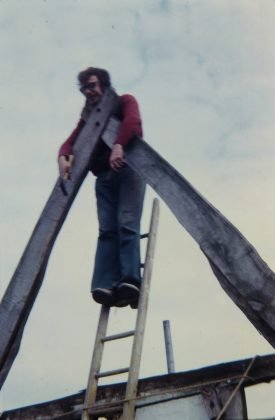 Rewind back to 1975, and we’d left the Parrott House story at a time when the building was under threat of demolition. The owners at the time have failed to comply with instructions to preserve the building on site, and it seems the end is nigh.

This, however, is where the Milton Keynes Development Corporation (MKDC) come in. Paul Woodfield of the MKDC knows two of the neighbours to the house, who alert him as to its condition1. On 10th June 1975 the MKDC write to Rugby District Council enquiring about the house in Stretton. It is made clear that if there is any possibility of the house remaining in situ the corporation is not interested in removing the house.

Demolition is a real possibility

The reply from Rugby suggests demolition is a very real possibility, so the MKDC arrange to meet the current owner of the Parrott House. The Rugby Advertiser reports the results of this, which sees an agreement for the timber frame to be removed and re-erected. The demolition is agreed with Rugby District Planning Office on the grounds it is going to a better use. Indeed, Paul Woodfield remarks that there was no site available in MK when it was taken down and, indeed, it proves to be a challenge to find one2. Potential uses considered, yet ultimately not coming to fruition, include re-erecting the house as part of a museum project, or as a pub/community house [alas the minute for this is lost!] at Two Mile Ash.

A local building firm from Ryton (AC Sutch Ltd.) is listed on the planning applications lodged with Rugby Borough Council to demolish the house. Before demolition takes place, details of the proposed arrangements for dismantling, transportation and re-erection of the timber frame are required to be approved by the local planning authority. When reviewed in the 1980s, the frame is found to about 70% complete, including roof rafters. All timbers are salvaged but some, particularly in the rear reentrant angles, require repairing3. The demolition of the building is no easy task, and great care is taken to ensure it can be re-erected as easily as possible, the original intention being to rebuild it properly, and restore it. On dismantling, the timbers are marked in paint and recorded to 1:50 scale. The conservation officer writes at the time that details such as the brick reredos, joists and a raised cruck blade used as a tie are considered to be of particular interest4.

The house moves, but no re-erection!

So the house is taken down, and the frame moves to Milton Keynes, but its battle for survival is not over! The plans to re-erect at Two Mile Ash fall through, and instead the frame is stored at Bradwell Abbey. In safe keeping it may be, but what is its future? The next article will suggest some answers.

2 There was opposition within Milton Keynes as their view was that it was their job to build new houses, not to rebuild old ones.

3 As can be seen from the pictures, by the time of demolition the roof tiles and floor boards were no more.

4 In a recent interview with the author, he states that the house had some interesting architectural features such as the brick backing to the fireplace, which in his opinion is one of the earliest uses of brick in the area.

Map marker in the right place? If not, please correct the map.
Locations
Stretton on Dunsmore (117)
Warwickshire unspecified or out of county (182)
Subjects
Farm Houses, Cottages and Manor Houses (820)
Semi and Detached (404)
Author
Benjamin Earl
Date

Linkedin
More from Stretton on Dunsmore
More from Warwickshire unspecified or out of county
More from Farm Houses, Cottages and Manor Houses
More from Semi and Detached