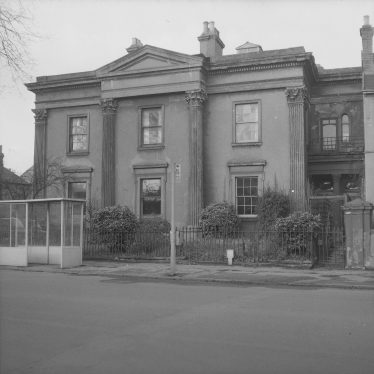 The part of the property to the right of the column behind the bus stop sign was, at the time of its demolition, known as Gower House. Photo taken from Radford Road c. 1967.
Warwickshire County Record Office reference PH(N) 449/265. 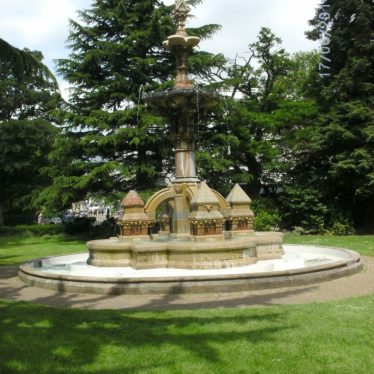 The Hitchman Fountain. Built in 1869 after a design by John Cundall who lived in Gower House from around 1875 until his death in 1889.
Photo by Richard Neale 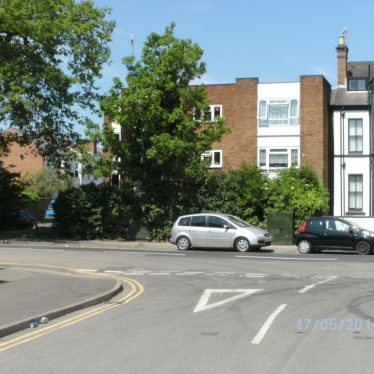 The site of Gower and Warnford House.
Photo by Richard Neale.

Tracing the residents of the property from 1883 onwards has been fairly straightforward because from that year there are surviving street directories. While there are gaps in the series of these directories, they cover the period up to and beyond 1968 when the property was demolished.

Moving back from 1883 was trickier. While there are directories back to 1828 there are large gaps in the series, plus only a small number of the town’s residents are included as a fee was charged to appear in these directories.

However, using a combination of these directories, the Census Returns and the Parish Rate Books I am confident I have managed to track the occupants back to within around three years after the property was built. Before 1839 there is no distinction in the records between the two parts of the property. The ‘Downloads’ section of this page has an attachment that lists the residents.

The 1881 census does not name the house but I am confident I have the correct part of the property as the 1883 Spennell’s directory names the house as does the Kelly’s Post Office directory of 1880. On both occasions the resident is given as John Cundall.

Before the mid 1870s, the evidence seems to show that the whole of the property was referred to as Warneford House.The earliest record I have found where this part of the property is named Gower House is the Kelly’s Post Office directory for 1876. So it may be that Mr Cundall was the person who named this part of it Gower House when he moved in around 1875. I list more details about the residents in the attachment accessed via the ‘Downloads’ section of this page.below.

We know from the 1851 census that Mrs Jane Bunney was a Fund Holding Gentlewomen. This census also records the house as Warneford Terrace. This name is also used in the directory for 1835 when the property was newly built. This seems to suggest that this was the name originally intended for this part of High Street, but the rest of the grand terrace was never built.

The name Warneford Terrace was later used as the name for a row of labourer’s cottages, facing the canal, at the bottom of Althorpe Street.