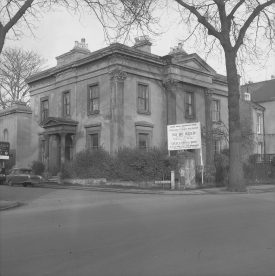 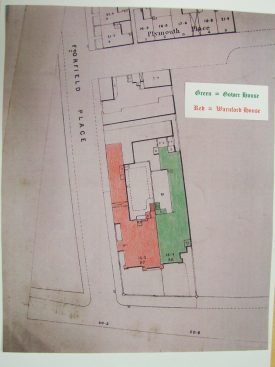 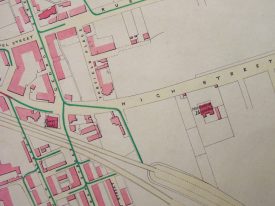 Gower House and Warneford House were two separate residences that made up a large regency style property which, at the time of its demolition, stood on the corner of Forfield Place and Radford Road, Royal Leamington Spa.

Before 1890, even in large towns and cities, many properties did not have numbers and even if they did the numbering could be rather haphazard. So in 1890 the Post Office undertook a nationwide project to give all properties an official postal address and to renumber said properties so that they, where possible, conformed to the standard still used today. i.e. even numbers on one side of the street and odd numbers on the other.

At this time the boundary between High Street and Radford Road was set at their junction with Althorpe Street and George Street, with part of the property being given the address 13 Forfield Place, and the other part was labelled 11 Radford Road.

Using maps to date the property

I have found three maps that help tie down when the property was built. The first dates from 18181 and shows no buildings on the north side of High Street beyond what is now Packington Place. Inspection of the map also shows that George Street and Forfield Place etc. have yet to be built. The second is a map of 18342, this does show building further along High Street/Radford Road, including Forfield Place, as yet unnamed. The site of the property however, is part of an area marked for ‘intended building’. The third is a map of 18413, it is dated for September of that year and does show the property.

The above suggests that the property was built between 1834 and 1841. To try and narrow things down further I looked at the Parish Rate Books from 1840 back4. These show no record of the property before 1835, which seems to confirm that it was built sometime during 1834.

During its life the building had many roles. It served as a lodging house, a private hospital/nursing home, and a motor cycle engineers as well as a private residence.

Unfortunately, it suffered the fate of many of Leamington’s once fine buildings. After the Second World War it slowly fell in to disrepair until it was sold by its elderly owner; it was then demolished and a block of modern flats built on the site. This was in 1968, and if it had lasted into the 1980s it might have survived to be converted. But in the 1960s even the fact that it was listed could not save it.

Linkedin
More from Leamington Spa
More from Semi and Detached