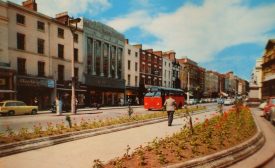 Postcard of a Midland Red bus driving along the parade, Leamington.
Picture courtesy of Richard Neale. 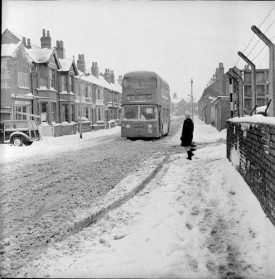 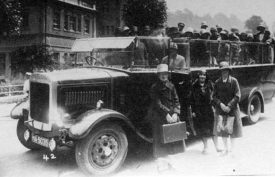 Warwickshire has many familiar images including Warwick Castle, Shakespeare’s Stratford, Rugby School to name but three. Another image surely still familiar to many residents, and which also acted as a signal you were in Warwickshire were the bright red buses, Midland Red. Stroll around the towns and villages of Warwickshire in days gone by, and you would have seen their familiar colours along with, in certain areas, Stratford Blue.

History of the company

The livery of Midland Red has always been, unsurprisingly, red, but after nationalisation the colour was changed to a brighter shade. Come the 1980s, Warwickshire fell under the umbrella of Midland Red (South) before the company was eventually swallowed up by Stagecoach. This saw the famous bright red buses disappear from Warwickshire’s streets.

Do you remember using Midland Red buses for either work or school? Do you remember any of the characters you would meet, or interesting events? Let us know.

Map marker in the right place? If not, please correct the map.
Locations
Warwickshire unspecified or out of county (182)
Subjects
Buses, Coaches and Charabanc (61)
Author
Benjamin Earl
Date

Linkedin
More from Warwickshire unspecified or out of county
More from Buses, Coaches and Charabanc