You are here: Home>Locations>Coventry>Christmas Presents, and Visiting the Big City 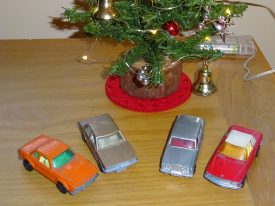 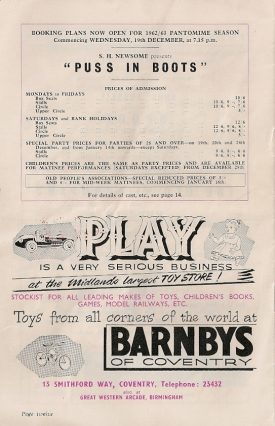 A Christmas Pantomime and an advert for Barnbys. What could be more festive?
Originally posted to flickr by Bradford Timeline 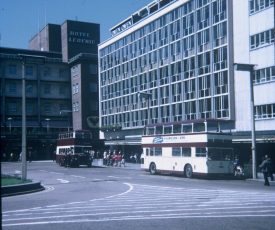 At first glance, these may not look like much – just a couple of toy cars in, well, not bad condition, but not perfect. It’s funny how the small things can spark a memory or two however.

Not for me an age of Xboxes and Playstations, my entertainment came from good old fashioned toys such as these. It was quite an obsession really – the weekly trip into Coventry was a good chance to pick something up. We used to go early on a Saturday to beat the queues for the multi-storey car park, this was at a time when city centre shopping was where it was at, none of this out of town park or online nonsense. Oh no, we’d all have to go in, so early meant a space, and no queue, and no risk of unreliable machinery overheating. Barnbys the toy shop in Smithford Way was definitely the place to go. It seemed like there was this huge corridor into the shop, when you were surrounded by bright likes on either side in the display windows, and the tiled floor seemed oh-so-white – I bet it wasn’t.

It was up the stairs to the toy cars, and it seemed like oceans of choices. My parents were quite generous, but they were always the small ones I was bought – I don’t know if it was my choice, or cost. Sometimes, I was desperately keen to have a closer look at what I’d bought, and this could be quite dangerous with a large throng of people about – I remember walking into the kneecaps of a very surprised gentleman, while I was expecting, all too closely, the Volvo 240 estate I was now the proud owner of.

As you can see, I wasn’t a great fan of glamour(!) the cars would also be treated relatively nicely, for a small child anyway! No racing for me, instead it was three point turns and parking under the sideboard on the horribly nasty looking, very ‘70s carpet in my parents front room.

Later, trips ended up being to Cannon Park in Canley. The supermarkets there were some of the few you could go to, not like today, and my Mum couldn’t drive, so we had to go as a family. I’d stand in a queue with a box on my head, as you do. The boxes were useful for packing – an early form of recycling, before carrier bags! I also remember Sainsbury’s, I think it was, introducing bar codes. They were horribly unreliable to begin with, and slowed the queues down terribly. How we wished for the reintroduction of the paper label with the price on it! It’s funny to think that nowadays we don’t even need a human to scan things.

Christmas presents would still see me get… a toy car! I guess at least it made it easy. I ended up with hundreds of them, have got rid of plenty for space but still, today, find myself buying them to collect them! Nowadays it’s through ebay and the like though, although a visit to a toy fair in Ryton can still bring nostalgia and intrigue. Although I don’t get the car for Christmas anymore I do, however, still get a chocolate orange. Decades later (and even in a different century!) some things don’t change. My parents still live in the same house in Warwickshire. I may be substantially taller, but it’s still like going back to home as a youngster.

So shops were very different in those days, and a visit to town used to be an event. Looking across the grass and statue at Broadgate to the Cathedral seemed to be an experience, waiting for Peeping Tom to chime was too. Simple things, and the city seemed such a big place to a lad from the country. Having lived in London, now I wonder what all the fuss is about. Coventry’s not that big, it’s not that far away really (it always seemed to be further!) and it seems that nobody goes there anymore for shopping.

So instead, I’ll share it here. Anybody remember Barnbys or other Warwickshire toy shops?