You are here: Home>Locations>Cubbington>Annie Saunders. A Canadian Life, and a Return to Cubbington

Annie Saunders. A Canadian Life, and a Return to Cubbington 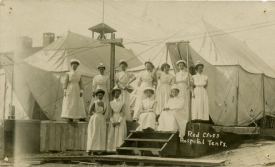 One of the typhoid tent hospitals. Cobalt, 1909.
Image courtesy of Cobalt Mining Museum 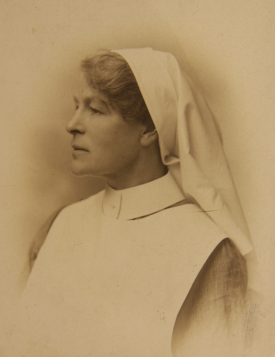 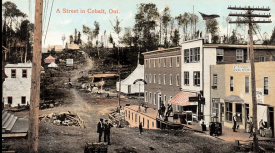 Annie Saunders was three years into her move from Warwickshire to Cobalt in Northern Ontario, when in 1909 a fire destroyed a large portion of the town. Buildings were mostly made of wood and were placed close together. Flammables and other burnable wastes had been dumped in between the structures, so the fire was unstoppable. Large numbers lost their homes and had to sleep in tents with less hygiene than previously. A month later the largest typhoid outbreak that Ontario has ever had occurred in Cobalt. Annie’s medical training, picked up in Warneford Hospital, was stretched due to the sheer volume of patients.

Although the hospital had a new addition completed just before the outbreak, it was insufficient and had too few staff to deal with the emergency. One in ten residents became infected. Annie sent to Toronto for help and 100 nurses came north. Army surplus tents from the Boer War were set up on the hospital grounds and at two other locations to deal with the worst cases. Many were nursed in their homes. The epidemic lasted for 3 months when many lost their lives.

An advocate for health care

Annie continued to advocate for improvements in health care in Cobalt. In 1910 the first nurses’ home was built to provide housing for those nursing at the hospital. Money was raised to bring the Victorian Order of Nurses to Cobalt and a house was rented to lodge them. These nurses had extra training in public health.

Annie was to leave Cobalt in 1915. By this time, the town had running water and a sewage system, and refuse was no longer thrown in the streets. There had been two additions added to the hospital, and it employed more nurses. With the improvement in health conditions there were no further epidemics. Annie left Cobalt in a much better condition than she had found it.

A return to England, and Warwickshire

Annie left Cobalt to return to England. She nursed there during World War One, between 1916 and 1919 – this is a woman who would always go where she felt that she was most needed. After the war she returned to Canada (to Vancouver, British Columbia) where her eldest son and her husband now lived. After this she moved to California in the U.S.A. to be with her youngest son, before moving to Lindsay, Ontario.

Her last move was back to her home town of Cubbington, Warwickshire in England and occurred in the last year of her  life. Records show that she was still working. I imagine she was nursing either a relative or a friend. Unfortunately she contracted an infection that developed into bronchitis, pleurisy and endocarditis, and resulted in her death in 1932, age 64.

Annie is remembered as a warm and caring person, a woman of strong convictions, who devoted her life to the care of others. Her courage and tenacity in the face of the huge odds she faced in Cobalt, demonstrate her commitment to the improvement of the lot of others.

In 1909 George Hincks wrote in the Canadian Nurse magazine about Annie and the hospital in Cobalt. However I think an even better understanding of Annie is seen in her two speeches that were published in the Canadian Nurse on Jan 1910 and August 1910. I have included these three articles so the reader can see for themselves, the value of this irrepressible woman.

Canadian Nurse is a magazine that began in 1905, and has changed names several times, but it is still published today. I had an article published there, January 2017, where I described some of the challenges I face, teaching nursing students today. There are no copyright renewals in existence for this magazine, and permission has also been granted to digitise much of the 20th century issues.