Ancient tax-gathering at Ryton on Dunsmore 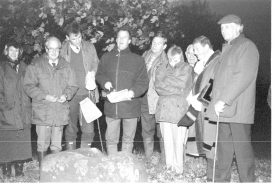 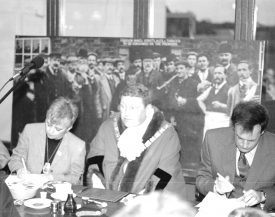 A very ancient ceremony takes place each year on November 11th just before dawn at Knightlow Cross in Ryton on Dunsmore (see photo). The collection of Wroth Silver dates back over 800 years. Representatives of 25 villages in the area pay their dues to the Lord of the Manor and then retire to a local inn for breakfast. The villages concerned are all in the hundred of Knightlow (a sub-division of the county of Warwickshire).

Origin of the ceremony

Opinions differ on the original purpose of the ceremony but the latest research suggests it was to provide a local baggage train for the King. The first written record of the collection of Wroth silver is in 1210, when it amounted to 14s 1/2d, but it may well have been established earlier than this. Payment was originally made to the King. Lordship of the Hundred (with the right to collect various taxes) now belongs to the Dukes of Buccleuch and Queensberry. The present holder is the 10th Duke, who attended the ceremony in person in 1975.

The amounts paid by the 25 villages today add up to 46p (nine more places used to contribute including Rugby, which was much smaller then). There’s a reasonable correspondence between the importance of each village at the time of the Domesday survey, and the contribution in Wroth Silver still made today.

Non payment incurred a fine – the village concerned was required to pay 100 pence (£1) for every penny owing, or to produce a white bull with red ears and red nose. The bull forfeit may be an invention of the second Duke of Montagu – known for his love of hoaxes – who may have introduced this to spice up the ceremony in 1729. It is not enforced today.

Details of the ceremony

The Knightlow cross field is still owned by the Duke, whose main estate is in Scotland. For many years Bill Quarterman was paid 1s (5p) to clean out the base of the cross; he was also given pennies by local farmers to mind their horses during the ceremony. This starts at 6.45 a.m. with a speech from the Duke’s agent facing east. Attendance during the 20th century has ranged from over 300 to 6 (the latter during the Second World War). David Eadon has been attending for over 70 years. After a hearty breakfast there are speeches; the Duke and the monarch are toasted in hot milk and rum; clay pipes and tobacco are provided (though no longer smoked indoors). The photo shows the mayor and others at the breakfast in front of a picture of an earlier Wroth Silver group outside the old Dun Cow Inn (note the long churchwarden’s clay pipes).

It is tantalising to speculate about the collection of Wroth Silver. When did it start, and what was it for? Why aren’t all the villages in Knightlow ‘called’? At what stage did the sum collected become ridiculously small and the ceremony cease to be a useful tax-gathering exercise? There are reports of grumbling and cursing from participants in 1722, and contributions ceased to be compulsory in 1800; but who resurrected the ceremony 15 years later? Maybe it adds to the attraction that we don’t know all the answers. Does anyone have a personal memory of the ceremony to share?