You are here: Home>Locations>Warwickshire unspecified or out of county>Where to Find Anglo-Saxons in Warwickshire

Where to Find Anglo-Saxons in Warwickshire 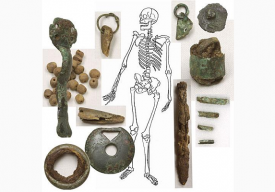 The grave goods found with the 'Cunning Woman', excavated at Bidford-on-Avon.
Image courtesy of Warwickshire Museum 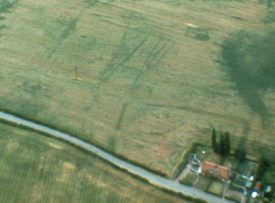 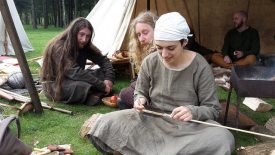 In Anglo-Saxon times (broadly 410 AD to 1066 AD), what we know as ‘Warwickshire’ was gradually taking shape. Over a thousand years ago, our county would have looked very different. Yet there are still remnants of Anglo-Saxon life in Warwickshire today…

The earliest written mentions of the county can be found in the Anglo-Saxon Chronicle, a text in which monasteries wrote down major political events each year. The founding of Warwick, Anglo-Saxon ‘Wæringwic’, is described in the year 914 AD. It was one of a series of fortified settlements constructed by Æthelflæd, the ‘Lady of the Mercians’, to reinforce her defences against the Danes.

The first mention of Wæringwicscir (‘Warwickshire’) comes a century later, in the year 1016 AD, when we hear that the Danish King Cnut raided the county; ‘they proceeded to Warwickshire, during the middle of the winter, and plundered therein, and burned, and slew all they met.’ Unfortunately, Æthelred the Unready, king at the time, was unable to raise an army to defend Warwickshire.

It’s a shame that the Warwickshire County Record Office does not hold any original Anglo-Saxon documents. However, we do have a photostat of a grant by King Æthelred himself, giving a parcel of land at Yceantune (‘Itchington’) to a person named ‘Clofi’.1

While very few documents survive from the period, the earth yields a greater treasure; archaeological digs across Warwickshire have found evidence of several cemeteries. These provide evidence of pre-Christian burials from around 500-700 AD, when early Anglo-Saxons were buried with their most precious belongings, including weapons and jewellery.

One particularly interesting burial is that of the ‘Cunning Woman’, found at Bidford with an unusual combination of objects, including amulets and a scalpel-like knife. The finds have led some archaeologists to view her as some kind of shaman, a healer-priest or woman with ‘special powers’.2

There are also coins, which indicate trade and settlement – there is even evidence of a mint in Warwick, as well as spectacular individual discoveries such as the Bidford-on- Avon aestal and the Warwick ring which give us clues to the where some settlements in Warwickshire may have been in the social and religious hierarchy. An outline of the various finds at Bidford, Wasperton and Stretton-on-Fosse can be found on the Heritage & Culture Warwickshire website.

Even above ground, remnants of Anglo-Saxon life can be found in our landscape and buildings. For example, churches such as Wootton Wawen, Loxley, and Tredington retain Anglo-Saxon stonework.

Evidence can come in unexpected place. For example, near Hatton Rock Farm (Hampton Lucy), cropmarks on aerial photographs show evidence of a ‘high status Anglo-Saxon Settlement’, and Guy’s Cave (near Guy’s Cliffe) ‘has been enlarged by human activity’, possibly as an early medieval hermitage.

In the 21st century!

Aside from all this ‘old stuff’, you might even find the odd Anglo-Saxon community in Warwickshire today! Members of reenactment groups still spend their days crafting, cooking, riding, fighting and living as ‘Anglo-Saxons’, trying their best to interpret these fragments and bring them to life for the rest of us. One group even trains in combat at the Lunt Roman Fort near Coventry. Anglo-Saxon civilisation may seem elusive, mysterious, even dry, but they were a vibrant and rich people with thoughts, plans, emotions, and a lot to teach us.

Linkedin
More from Warwickshire unspecified or out of county
More from Chapels and Churches
More from Miscellaneous Organisations, Clubs and Societies
More from Objects and Finds
More from New contributions