You are here: Home>Locations>Kenilworth>St. Francis of Assisi, Kenilworth 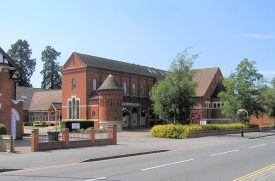 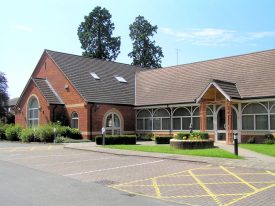 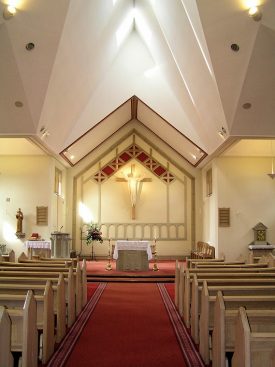 In the late 1950s the growth of the Catholic community was such that all Masses at St Augustine’s were very crowded. Arrangements were made for Mass to be said, originally in the lounge of the Green Man public house in Warwick Road, and then later in the bar.  A number of town centre locations were considered in the hope that a new church could be built.  As a result of further growth of the community, Father Archie Snell was appointed in 1964 as parish priest of the new parish of St Francis of Assisi. The present site, then known as Hotel Australia, was acquired in 1966 as a result of the generosity of parishioners and with funds previously raised.  Rooms within the building were converted to form a chapel.  The chapel was then extended to form the church hall which was used for Sunday Mass.  In 1988, on the retirement of Father John Collins, the parishes of St. Francis and St. Augustine were amalgamated, with Father Anthony Rohan as parish priest.

After widespread consultation it was decided that the new church, so long desired, should be built on the St Francis site.  An extensive financial appeal produced great generosity from members of the parish in the form of covenants, pledges and regular giving, so much so that the parish was able to gain the approval of the Archbishop to begin the planning and design of the new church.  Construction began in March 1992 and the church was competed in April 1993. The first Mass was said in the new church on Maundy Thursday, April 7 1993 and the blessing of it by Archbishop Maurice Couve de Murville took place on 18 May 1993.

With the new church prominently placed at the heart of Kenilworth, a decision was needed regarding the now deteriorating parish hall.  Father Peter Foley arrived in 1996 and already plans were beginning to come together for a new parish building to provide a setting for social and community activities in a structure complementing the new church.  Father Kevin Hooper came to the parish in July 1998 and the Parish Council was ready to proceed.

Thanks to them and a building committee drawn from professional experts within the parish, the parish centre was first used in July 2000 to prepare for the Ordination of Father Richard Walker. This was the first Ordination in the parish since the 19th century. Both church and parish centre have taken their place in the Kenilworth townscape and are regularly used for both worship and a vast range of family, school, charitable and social events for parishioners and the wider community of the town and its surrounding area.  With so much undertaken and achieved since Father Kane so boldly asserted in the 1960s that a new church would ‘shortly be built’, it is wonderful that such a spiritual and practical legacy should finally be offered in its entirety to Almighty God by the parishioners of Kenilworth for the future life of Catholic faith in this town.

The above content was adapted from the Kenilworth Parish History.