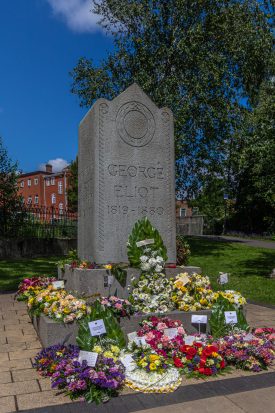 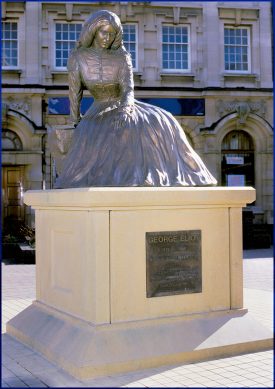 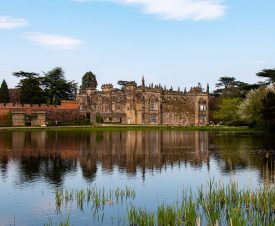 Arbury Hall from across the lake, 2019
Image courtesy of Christine Simmonds

We found an absorbing new interest for our retirement when we joined Coventry Photographic Society five years ago. When researching the society’s history and updating its society’s website, we discovered a Midland Daily Telegraph article that mentioned the society had done a photographic survey in 1919 to celebrate George Eliot’s centenary.1 It seemed a good idea to celebrate her bicentenary by taking photos at the same locations today. Comparison between the two sets of photos allows a fascinating look at how some things have changed or moved, whilst others have stayed much the same over the past 100 years. The ‘before and after’ photos form an exhibition that has recently been displayed at many places around Warwickshire.

A history in photos

The memorial to George Eliot shown here used to be situated in the grounds of Arbury Hall, but was moved to a more accessible site in the George Eliot Memorial Gardens, Nuneaton, in 1952; the George Eliot Fellowship lay wreaths here in June each year.  All Saint’s Church, Chilvers Coton, was where Eliot’s parents got married and she was christened Mary Ann Evans; it was bombed in the second World War, but rebuilt with the help of former German prisoners of war. Astley Castle, part of the Arbury Hall estate where her father worked, suffered a bad fire in 1978 but has been restored as holiday accommodation by the Landmark Trust. Some photos were impossible to replicate precisely: the original weaving loom was probably photographed in Bulkington but the more recent photograph was taken at the Weaver’s House in Spon Street, Coventry.

George Eliot was born in 1819 on Arbury Farm (now South Farm) where her father Robert Evans was the land agent for the Arbury estate. Shortly afterwards the family moved to Griff House, now a Beefeater/Premier Inn. Robert and his family worshipped in the church at Astley. The statue of her shown here was created by John Letts in 1986 and stands in Newdegate Street in the centre of Nuneaton. Some of the buildings associated with the author have been demolished, such as All Saints Vicarage, Chilvers Coton, and ‘The Elms’: a boarding school in Nuneaton that she attended.

The family moved to Coventry in 1832, which features as ‘Middlemarch’ in one of her novels. Mary Ann and her sister attended a private school in a house called ‘Nantglyn’ in Warwick Row that now sports a plaque above the entrance to the estate agent Loveitts. They moved to Bird Grove on the Foleshill Road in 1841. The house – in what is now George Eliot Road – has more recently been used as a Bangladeshi community centre, but is currently in a state of disrepair. George Eliot attended Holy Trinity Church to please her father, even though she herself became a free-thinker and lost her faith. Quarter Sessions held at St Mary’s Guildhall inspired the setting for the trial of Adam Bede and was the venue for the centenary exhibition in 1919.

The project was an exciting challenge for our members who have been busy taking the photos during the past few months. . We printed and mounted the photographs ourselves, and the exhibition includes at least one photo from each of the members involved. John Burton of the George Eliot Fellowship gave us a talk and some of us joined him on the George Eliot countryside trail in and around Nuneaton, and were granted access to Arbury Hall and South Farm – not normally open to the general public. Background research into the history of each photo was undertaken by Christine Simmonds so that additional information could be provided at the exhibition.

The first photographic survey was undertaken just after the end of the first World War for an exhibition in St Mary’s Hall organised by Coventry City Council. The programme of that exhibition has now been digitised by the Gutenberg project and can be seen on their website. The Coventry History Centre holds 45 of the original photos in a book produced by the Coventry Library Committee together with other articles to do with the exhibition. 3 Copies of the photographs were kindly scanned by them for us to reproduce.

Linkedin
More from Coventry
More from Nuneaton
More from Miscellaneous Organisations, Clubs and Societies
More from Outreach 100 Objects
More from Writers and Authors