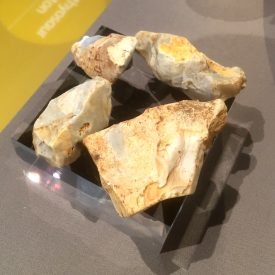 Pebbles of many different rock types can be found in Warwickshire, and are commonly encountered in fields, gardens and parks.  Flint, best known from southern and eastern England, is present as pebbles in many parts of our county, and can be quite abundant in the east, notably in the Rugby area.

Typical British flint is an extremely hard, fine-grained, glassy rock, made up of billions of microscopic crystals of the mineral known as quartz. Flint is often black, grey or brown when fresh, and develops a characteristically pale, porous weathered ‘rind’, when it has been lying at the surface, or in soil, for some time. It originates as hard nodules and brittle sheets in the sedimentary rock known as chalk, which is a soft white limestone. Thick, flint-rich chalk formations characterise many parts of southern and eastern England, for example the Sussex and Surrey Downs, Chiltern Hills, and Yorkshire Wolds.

How did flint end up in Warwickshire?

Flint has been scattered throughout many parts of Britain (not least Warwickshire), by both natural and human agency. Because it is so hard, flint has been recycled many times through marine, river-borne and even glacial deposits, since its formation between about 80 and 90 million years ago in the chalk sea. In Warwickshire, some of our flint was introduced by the naturally ploughing action of advancing ice sheets, from the north-east, over the last half million years. Also, our human ancestors early discovered the uniquely useful properties of flint – its ability to be flaked into fine handaxes and arrowheads, possessing a glass-like sharpness.

Map marker in the right place? If not, please correct the map.
Locations
Warwickshire unspecified or out of county (182)
Subjects
Geology (42)
Author
Jon Radley