You are here: Home>Locations>Coventry>Origins of the Coventry Photographic Society

Origins of the Coventry Photographic Society 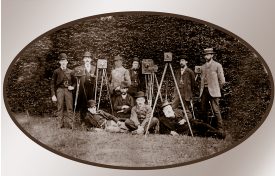 The Coventry and Midland Photographic Society (as it was then called) was one of the first in the country: it was founded in 1883 by ten gentlemen who met in the Provident Dispensary in Priory Street. The splendid photo featured on this page shows members standing proudly with their cameras and tripods and it is likely that the photo was taken by Edwin Walker, a founder member of the Society. We can name many of them and they were mostly amateur photographers. However, local trade directories show that one of them turned his hobby into an occupation: in 1880 he was a watchmaker and in 1884 a watch-repairer but by 1888 he was running a photographic studio in Earl Street.1

Edwin Walker was a watchmaker who joined his father’s business in Earlsdon. He was also a keen amateur photographer who exhibited photos at the Club’s 1888 exhibition at the old Grammar School in Hales Street.2 Jeremiah Martin Danks (usually called Martin) was another early member of the Photographic Society. He married Ann Elizabeth Chadwick and joined her father’s watchmaking business in Earlsdon. His son – another Martin – was also a keen photographer who took many pictures of Earlsdon. Fortunately his grandson also took an interest in photography and preserved a collection of glass plate negatives including the photograph shown above.3

The Society changed its name in 1903 to ‘The Coventry Photographic Club’ and then in 1933 to ‘The Coventry Photographic Society’. Early members included many well-known Coventry figures: Rotherham (lawyer and JP), Starley (son the bicycle inventor) and Iliffe (owner of the Coventry Evening Telegraph). Finances could be a problem in the early days: one year they only had 2s (10p) cash and 7d (ca 3p) in the bank and had to be bailed out by the Secretaries. Outings were made by members and their families to places like Coombe Abbey by bicycle or horse-brake.4

The society held regular public exhibitions of their work. In 1919, members of the Coventry Photographic Club celebrated the centenary of George Eliot’s birth with an exhibition of over 140 photographs of sites in Nuneaton and Coventry associated with her. Other celebrations were held for the Society’s own centenary in 1983.

Members have been investigating the history of the Coventry Photographic Society. They decided to create a photographic commemoration for George Eliot’s  bi-centenary in 2019. They took photographs similar to those from 100 years earlier to display alongside the originals. Perhaps there will be another exhibition of photographs a hundred years hence: you might like to speculate on what changes will have occurred by 2119.