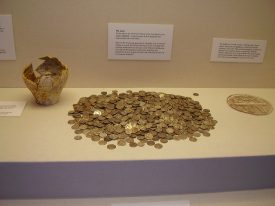 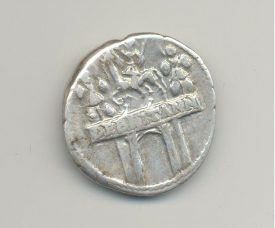 One of two denarii commemorating the Conquest of Britain by Claudius in AD 43.
Photo courtesy of Warwickshire Museum Service

In 2008, a hoard of 1146 silver Roman denarii coins was discovered in a small white ware pot buried in a field on the Edge Hill. The hoard was eventually acquired by Warwickshire Museum and is now on display at the Market Hall Museum in Warwick. There have been further coins found on the site and the hoard now stands at 1155 coins. All the coins in the hoard are made of silver, this type of coin is called a denarius – it was the same as ten sestertius (a large copper or bronze coin). The oldest coin in the hoard dates from 194/190 BC to AD 64 – over 200 years before the Romans conquered Britain in AD 43 (under Emperor Claudius).

The head of the ruler

Imperial coins from the time of Augustus (first Emperor) always have the head of the ruler on one side – something we still do today. Before Augustus, Rome was a Republic and coins were struck by different people – usually wealthy and powerful members of the ruling Senate. Coins were often used for propaganda, for example, to celebrate key people and their victories and conquests. The images on the coin reverses include buildings, altars, people, gods and goddesses, animals, mythical creatures.

Why coins so old in Britain?

When the Romans invaded in AD43, there were a large number of Roman soldiers that came over to make sure the Britons stayed conquered! These soldiers had to be paid and Britain did not have a proper monetary system before the Romans came, so they had to bring it with them. Even though the older coins are quite worn, they are still almost pure silver, so could be used together with the newer ones. We will never know why these coins were collected together and placed in the ground, or by whom (was it one person, a family or larger group?) – it may have been an offering to local deities, or for safe-keeping in a time of uncertainty. Whatever its origins, the South Warwickshire hoard is an important discovery for Warwickshire and the wider region and future research on individual coins and the hoard as a whole will reveal more about our Roman past.

‘The South Warwickshire Hoard of Roman Denarii – A Catalogue’ by Stanley Ireland is published by Archaeopress Ltd (BAR British Series 585, 2013).

Warwickshire Museum acquired the South Warwickshire Hoard under the Treasure Act with the generous assistance of The Art Fund, The V&A Purchase Grant Fund, the Headley Archaeological Acquisition Fund, and the King Henry VIII Endowed Trust of Warwick.

Linkedin
More from Edge Hill
More from Objects and Finds