You are here: Home>Locations>Kenilworth>The Burial Urn of Kenilworth’s Oldest Inhabitant Poised to Go On Show 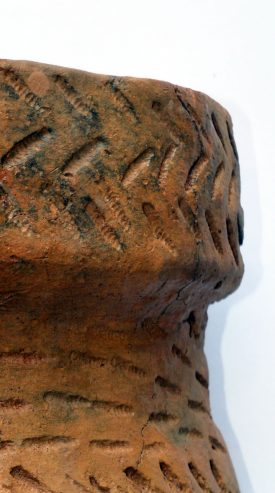 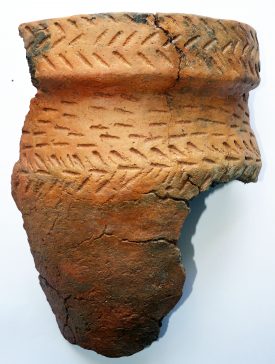 For the first time in 4,000 years, a very rare burial urn – first excavated by archaeologists from Warwickshire County Council – is going on display in Kenilworth’s Abbey ‘Barn’ Museum having being donated to Kenilworth History and Archaeology Society.

The urn belonged to Kenilworth’s earliest known human inhabitant, whose cremated remains were found in Clinton Lane during routine observations in the foundation trenches which were being dug for a small housing development on behalf of Mr Stephen Bond.

Archaeology Warwickshire’s Project Officer Bryn Gethin, who found the burial said “I was looking for evidence of medieval settlement, and was surprised to see what looked like cremated bone fragments in the side of a trench. Further investigation revealed the bones were underneath a type of prehistoric pot known as a collared urn. These date from the Early Bronze Age period, between 2500BC and 1800BC but we had to send samples of bone to be radiocarbon dated to confirm the age of the burial”.

Landowner Mr Stephen Bond, who is the grandson of the late Mr Herbert Bond who acquired the land in 1917, said it was a privilege to donate the find to the people of Kenilworth for future generations to enjoy.

Archaeology Warwickshire Business Manager Stuart Palmer added “Although a few flint tools that are potentially older than this find have previously been discovered in Kenilworth, this is certainly the earliest known human inhabitant of the area. It is possible that the burial was originally covered by a mound that would have been prominent on the skyline but which has long since disappeared”.

Kenilworth Abbey Ward Cllr John Whitehouse said: “It’s fantastic that this artefact is returning to Kenilworth and will form a prominent part of the Abbey ‘Barn’ Museum when it reopens to the public on Easter Sunday. I am certain this piece will be an enduring tourist attraction for our town and further reinforces, for future generations, just how steeped in fascinating history Kenilworth is.”

Cllr Jeff Clarke, County Council Portfolio Holder for the Heritage and the Environment said: “We are very proud of the work done by Archaeology Warwickshire, who are experts in so many aspects of local history and always willing and able to use that expertise to assist on a wide variety of fascinating projects. Along with the remains of Roman child, Oriens, the Kenilworth Urn is one of their most fascinating finds and well worth a visit at the Abbey ‘Barn’ Museum when it reopens.”

The urn will be on display when the ‘Barn’ reopens for visitors on Easter Sunday 5th April and will be open every Sunday and Bank Holiday Monday until mid-September from 2.30 to 4.30 pm. It is staffed by volunteers from KHAS and other local organisations and admission is free of charge.

You can find out more about the work of Archaeology Warwickshire on their webpages.

Linkedin
More from Kenilworth
More from Objects and Finds