You are here: Home>Locations>Ettington>A ‘Negro Woman’s Lamentation’? Searching for Black Voices in the Warwickshire Archive

A ‘Negro Woman’s Lamentation’? Searching for Black Voices in the Warwickshire Archive 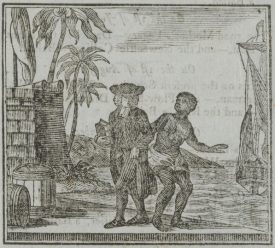 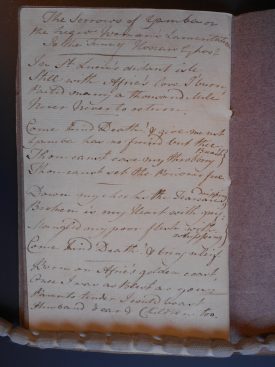 It can be very difficult to find black voices from Warwickshire in our archives. We have found that many of our historical records relating to black people come from the perspective of white individuals or institutions; for example, documents which mention slaves do so by reference to their ‘masters’. This handwritten poem, entitled ‘Negro Woman’s Lamentation’, seemed like it had some potential.1 Unfortunately, it was too much to hope that the poem contained the words and emotions of a black woman in the 18th century. It is, however, an interesting example of how the narrative of black people has been shaped by white voices, each seeking to have their own say on the life of a female slave.

‘The Sorrows of Yamba’

The poem, also known as ‘The Sorrows of Yamba’, is the emotive tale of a woman who was taken from her home and family in ‘Afric’s Golden Coast’ to be sold as a slave. On the sea voyage her child dies, which Yamba takes to be a blessing; ‘Thee, sweet infant, none shall sell.’ Her life as a slave is hard and cruel. The poem reaches a climax when she runs to the sea with the intention of casting herself in; ‘Death itself I long’d to taste.’ At this point, the poem takes a turn. Yamba meets a missionary, Bible in hand, who converts her to Christianity and teaches her to forgive her masters. The poem ends with Yamba hoping that missionaries will travel to her homeland and convert her husband.

The poem was published in the 1790s by Hannah More, who produced the widely successful ‘Cheap Repository Tracts’. It was set to the tune of Hosier’s Ghost, and became ‘one of the most popular and frequently reprinted antislavery poems of its time’.2 However, some historians suggest that the poem originally was written by Eaglesfield Smith, a Scottish laird.3 Both versions of the poem condemn British involvement with slavery, describing it as a ‘deed of shame for Britons brave’. That said, Smith’s version of the poem has some notable differences. In particular, it ends with Yamba’s intended suicide; there is no missionary and no conversion narrative.

The first half of the poem (attributable to Smith) is emotive and tragic, highlighting the similarities between Yamba and her readers; ‘Once I was as blest as you; / Parents tender I could boast, / Husband dear, and children too.’ However, More distances the presumed white British reader from Yamba by introducing ‘pseudo-dialect’ and grammatical flaws into the poem, making Yamba appear childish and uneducated.4 For example, instead of ‘master’ More writes ‘massa’, ‘wily man’ changes to ‘whity man’, and Yamba says of the Bible ‘poor me no understand’. The two approaches arguably demonstrate ‘two distinct strains of British anti-slavery discourse at work’.5

More’s tracts enjoyed a wide readership, and printed copies of this poem survive in across the country. Here in Warwickshire, though, we have a handwritten copy. The poem must have made an impression on Evelyn John Shirley, grandson of the Earl of Ferrers and later to inherit Ettington Park, because he took the time to write it out in full. The notebook is dated 1801, meaning that Shirley would have been around 12 years old when he made the transcription. His youth alters the way we perceive this source. How was this poem seen through a child’s eyes? Did such simplistic narratives of slaves and their Christian saviours foster a sense of empathy and compassion in the young Shirley? Or did they reinforce an ‘infantilising’ view of black people, or even an attitude towards black lives as a source of entertainment?6

What is clear is that the poem Shirley transcribed was not the voice of a black woman, but an amalgamation of white voices. However, it does allow us to further understand and acknowledge various facets of race relations at work during the struggle for abolition.

2 Alan Richardson, ‘“The Sorrows of Yamba,” by Eaglesfield Smith and Hannah More: Authorship, Ideology, and the Fractures of Antislavery Discourse‘, Romanticism on the Net 28 (November 2002), 1.

5 Richardson, “The Sorrows of Yamba”, abstract.

6 Richardson, “The Sorrows of Yamba”, abstract.