You are here: Home>Locations>Nuneaton>Priory of St Mary, Nuneaton. 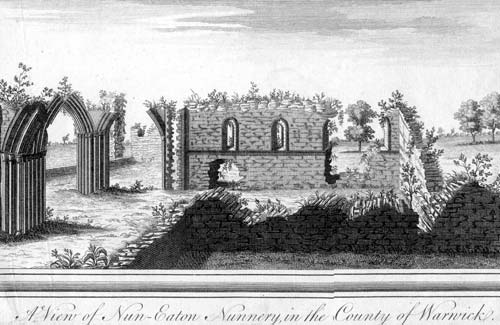 An engraving of the Priory of St. Mary, Nuneaton
Warwickshire County Council
Description of this historic site

The site of the Priory of St. Mary which was founded during the Medieval period. The site is located 50m west of Manor Court Road, Nuneaton.

1 Attached to the Order of Fontevrault. Founded between 1155 and 1159. The community consisted of sisters and brothers, living apart, but meeting in the church for common worship. The number of ‘inmates’ was very large. In 1328 there were 89 nuns and in 1234 there were 93. The priory was surrendered in 1539.
2 VCH description, was a nunnery.
5 Remains include the Church of St Mary (PRN 6311), various disturbed banks and mounds suggesting the site of the Infirmary etc (PRN 6312) and the lowest courses of the jambs of the chapter house have been excavated (PRN 6313).
6 The abbey precinct formed a triangular area between the river, Abbey Street and Queens Road. This precinct was divided into an inner and an outer court. The former was the cloisters and conventual buildings that surround it and the latter was W of the main buildings. Buildings included the Prior’s House (PRN 6314), Cloisters (PRN 6315) etc.
9 Excavations of parts of the Priory were undertaken in 1981, 1986, 1987. Part of the precinct in the area of Manor Court was evaluated in 1991 (see related PRNs).
10 The scheduled area of this monument was revised in 1991 (now SAM 17005 – was SAM Warwicks 105)
11 An excavation was carried out of the foundations of a new conservatory; no features of archaeological significance were found.
12 Archaeological observation of a gas pipe trench identified material relating to the demolition of the Priory buildings.
13 An evaluation trench excavated in 1987 c.50m east of the cloisters revealed a robbed-out wall running N-S for at least 9m. A slighter wall extending west may be part of the same structure. The structure was abandoned in the 16th century and robbed in the 17th.
14 French survey by A Dunet.
15 Two small areas were excavated in the NE corner of the Abbey Field in 1986. These produced evidence of robbed out Medieval wall lines and other features
16 Notion of a double house in 1 is incorrect, apparently a misinterpretation of VCH.
19 Plans from the DoE Central Excavation Unit.
20 Note about unauthorised construction.
21 Letter from 1990 about the development within the Priory precinct.
22 Letter from the architects about the vulnerable condition of the walls.
23 General notes on the Priory and on the later Anglican church.
24 Communications with British Gas in advance of 12.
25 Letter from EH about Manor Court Old People’s Home.
26 Report on work in the footprint of the vicarage in 1987; lines of rubble were recorded, most likely from robbed out walls. Salvage recording also took place in the grounds of Manor Court, where two substantial walls were recovered running parallel to Hollystitches Brook. These were associated with a substantial depth of stratigraphy and were of different constructions. They form the first firm evidence of monastic buildings to the west of the cloisters.
27 Report on work in 1986, 50m east of the cloisters in the northeastern corner of Abbey Field.Early medieval to post-medieval features were recorded, including roobed-out walls that almost certainly belong to the extra-claustral layout of the Priory.
28 No evidence was recorded of the priory or precinct boundary during observation at Pool Bank Recreation Ground to the east adjacent to the scheduled area of the priory.
29 Records were made of the extant walls of the former nave, transept and chapter house prior to consolodation work.