You are here: Home>Locations>Alcester>Site of Alcester Abbey 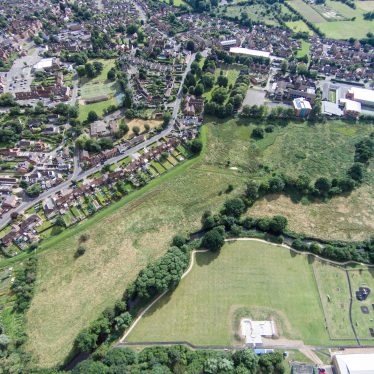 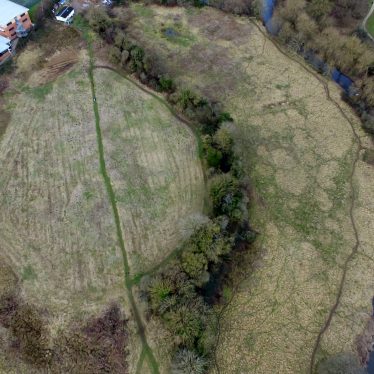 Entire Alcester Abbey site. The Mill Leet in the centre flowed through the middle of the medieval site.
Image from the personal collection of Mike Gittus 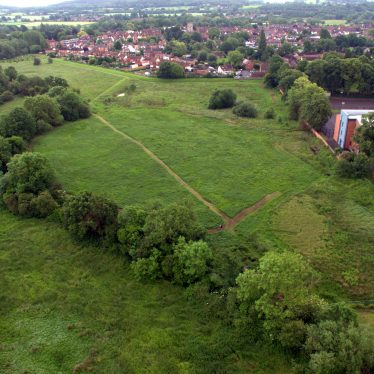 A further aerial shot of Priory Site, Alcester.
Image from the personal collection of Mike Gittus
Description of this historic site

1 1140 Ralph le Boteler of Oversley founded a Benedictine abbey. The site was encompassed by the River Arrow to N and E and by a connecting moat to S and W. In 1467 the abbey was absorbed into Evesham, owing to mismanagement and neglect. The priory was dissolved in 1536.
2 Two fields on the right of Priory Road, behind the cemetery, are named Abbey Meadow and Priory Close and mark the site of the ancient Abbey of Alcester. Nothing remains above ground, but excavations begun in 1938 partially revealed the plan of the abbey.
4 Excavated by R I Threlfall in 1938. Three domestic buildings at the corner of the N and E ranges excavated. In 1939 two buildings of the N range were excavated. One may have been the chapter house, and three graves were found. Pottery and large quantities of stained glass were found. Also moulded stone, painted wall plaster, part of a stone bowl and bronze objects.
5 In addition to the chapter house the refectory was uncovered. This was an unaisled hall 5.3m wide.
6 Scheduled as Warwickshire Monument No 165.
7 J Bond undertook a plane table survey in 1973. The site is now marked only by earthworks. These earthworks have been disturbed since the demolition of the buildings, but a tentative interpretation can be attempted. An island is enclosed by a moat and the river, and earthworks, probably of claustral buildings, survive in low relief. The site of the church, cloister-garth and ranges S of the cloister may be tentatively identified. Outside the moat to the SE are traces of a further building. All the notes from the 1938 excavations and most of the finds were lost during the war.
8 Permission to remove earthworks to create playing fields was refused by the DoE.
10 The site was surveyed and researched in 1992 by RCHME in connection with a fresh proposal to create a school playing field.
11 A BA dissertation illustrated some of Threlfall’s finds.
12 Text of a short paper given by I.Threlfall in August 1938 to the Birmingham Archaeological Society, with illustrations of finds and some correspondence
13 Rescheduled as SAM 21562. The precinct boundaries are thought to be defined by the River Arrow along its north and east edge and on its north-west by the mill and mill-race of Ragley Mill. The scheduled area has been extended to the south east to include further earthwork remains believed to be associated with the monastery.
14 No evidence of medieval occupation was recovered from any of the trenches. This would also suggest that significant activities associated with Alcester Abbey did not extend beyond the river. It is likely that the area around the site was under cultivation from the medieval period until the 1970s.
15 Correspondence from 1979.
16 Correspondence from 1989 about land within the scheduled area.
17 Correspondence from 1992 about the RCHME survey 10, and funding it.
18 Correspondence from 1996.
19 Mentioned in list compiled by Seaby in 1954.
20 Medieval post settings, a post pad and two pebble surfaces were found during an evaluation.
21 Medieval structural remains found during an observation following the evalaution 20 at the grammar school may have been outer court structures from the Abbey. Demolition material probably relating to the dissolution of the Abbey was also found.