You are here: Home>Locations>Wasperton>Excavation of Iron Age Settlement at Wasperton 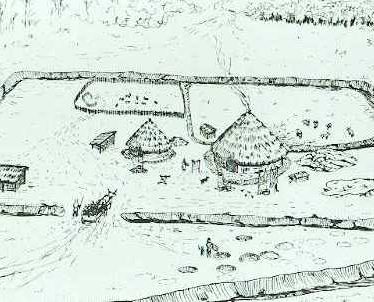 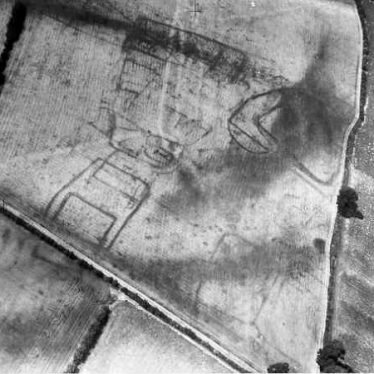 The site of five settlements dating to the Iron Age were discovered during excavation. Enclosures, ditches, post holes, hearths and pit clusters were found along with an inscribed stone and pieces of antler. The site is located south of Wasperton.

1 Excavation undertaken between 1980 and 1985 in advance of gravel extraction. Settlement 1 was a subsquare enclosure with sides approximately 50m in length and a single entrance central to the SE side. The enclosure ditch had a steep V-shaped profile and was approximately 2.5m wide and 2.5m deep. With an internal bank this would have been a formidable structure. It was later replaced by a larger enclosure retaining the SE entrance. This was a slighter ditch with other associated ditches and post holes. More than half of the interior could not be investigated, but a hut circle, hearth, pits and post holes were noted. Settlement 2 consisted of a series of recut rectilinear enclosures with a cluster of pits. A small roundhut was cut by the enclosure ditches. Settlement 3 was an enclosure measuring c75 by 60m. It was subdivided and contained a single hut. The enclosure ditch was a narrow shallow gully. Associated was a group of 42 pits. Settlement 4 consisted of two rectangular enclosures, a `working hollow’ and a number of pits. Settlement 5 comprised an unenclosed hut circle and over 45 pits. Settlement 6 comprised a single post-built hut. Thermoluminescence dates have been commissioned. No clear typology exists for the pottery which constitutes the most numerous class of artefacts.

4 The TL dates may indicate that the settlements were occupied in sequence rather than being occupied at one time.

8 In 1980-1 ten small ovens found by U-shaped field ditch 1.5m deep. A pit yielded a roughly-squared slab of local sandstone crudely inscribed FELICITER; above this was heavily burned material embracing two sets of unburned antlers with parts of the skulls still attached to form a square.