You are here: Home>Locations>Cubbington>Triassic Amphibians in Warwickshire 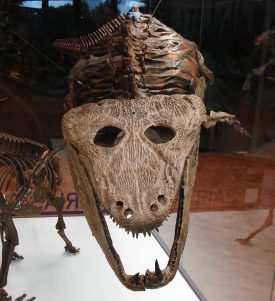 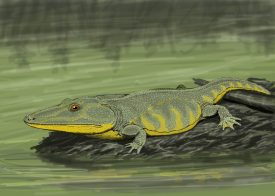 Guy’s Cliffe House just outside Warwick lies on a good exposure of middle Triassic sandstone. The rock is a geological site of special scientific interest and on the geological conservation review. The sandstone was laid down by wind-blown sand some 240 million years ago. In these rocks were found fine specimens of a large labyrinthodont amphibian called Mastodonsaurus giganteus (jægeri).

The specimen found at Guy’s Cliffe was described by Richard Owen in 1842 in the Transactions of the Geological Society of London along with specimens of other species found at Coten End, Cubbington, Lower Warwick and Leamington. Richard Owen was one of the country’s foremost zoologists, it was he who coined the term ‘dinosaur’ and was instrumental in setting up the Natural History Museum in London.

This particular species of Mastodonsaurus has only ever been found in Germany where it was first described by Georg Friedrich Jaeger of Stuttgart in 1824 from a single tooth he found. The unusual tooth the creature had gave it its name, meaning ‘breast-toothed’ lizard due to its nipple shape. He believed it to be a reptile but Owens was able to correct this and placed it in the amphibian clade.

Unlike other labyrinthodont amphibians Mastodonsaurus had a pair of incisor like teeth that grew out of proportion to the rest of the teeth forming tusk like structures. These tusks would have meant that the jaws would have been unable to close but in Mastodonsaurus, holes in the upper jaw allowed the tusks to poke through and allowed the jaws to close comfortably. It is unlikely that these tusks provided any biological advantage in eating but was more likely to have been used as a secondary sexual characteristic used in courtship display.

Overall Mastodonsaurus looked like a large flattened salamander, growing up to six metres in length. It had splayed legs and probably moved poorly on land. It had webbed rear feet and a fin like tail for swimming. It probably lived on the edge of swamps, rivers and lakes preying on fish and other small amphibians.

Part of a larger group

The Mastodonsaurus was part of a larger group called the Temnospondylii. This group of amphibians is part of the tetrapod lineage, they were the first vertebrates to be adapted to life on the land but it is debated as to whether they formed the direct ancestors of today’s newts, frogs and toads.