Seaside plants in the heart of England 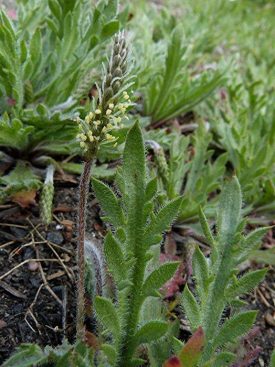 Buck's-horn Plantain, by A46 road north of Stratford-upon-Avon
Photo courtesy of John Roberts

Warwickshire has been a sea-bed in its time, with aeons-old, marine fossils found in geological exposures from north of Nuneaton to Burton Dassett. Today the county hosts a variety of land plants usually encountered at seaside locations. For example, Sea club-rush was reported in 1873 from a saline marsh at Southam Holt, where it still survives. A more local and colourful beach could once be enjoyed at Emscote, where the main railway branched to the former Warwick Electricity Sub-station. The embankment here caught fire in 1958. Sand was imported from South Wales to smother it, accidentally introducing the seeds of coastal flowers like Marram grass, Sand couch and Sand sedge. The dunes flourished for years, as described by John Bowra in the Warwick Natural History Society Annual Report of April 1978.

The current practice of salting roads in icy weather has created a roadside habitat inimical to most plants, whilst favourable to the salt-loving and salt-tolerant. Danish scurvy-grass quickly took advantage of this opportunity and is now widespread, gracing both main and lesser roads. Buck’s-horn plantain has followed, as we found plentifully on the A46 north of Stratford in 2014. Grass-leaved orache is another incomer, already settling beside the newly opened Rugby western bypass, near Cawston. Best of all has been Sea-heath, sprawling attractively into the road at Marlcliff.

The most recent arrival must be Shrubby seablite, spotted in 2013 on the central reservation of the M6 near Junction 14 by botanists familiar with the species. No specimen was collectable, so this must remain an unconfirmed record.

Nobody has yet claimed a seaweed, but who knows what rising sea levels may bring!