You are here: Home>Locations>Cubbington>Annie Saunders, and her Emigration From Warwickshire to Ontario

Annie Saunders, and her Emigration From Warwickshire to Ontario 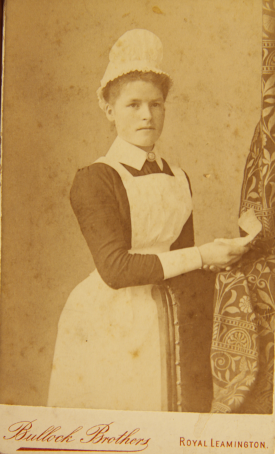 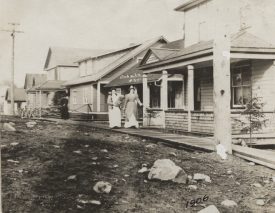 Cobalt 1906. Annie is the woman on the right.
Image courtesy of Cobalt Mining Museum

Cobalt May 1906, after the dynamite explosion.
Image courtesy of Cobalt Mining Museum

Mrs. Annie Elizabeth Saunders is remembered with affection, as the first nurse in the Northern Ontario town of Cobalt. She was also the first person to open a hospital in Cobalt. Her origins, however, were in the county of Warwickshire. This article traces her journey from the county to Ontario, how she put the medical training she had received in England to good use, and then returned to around Cubbington before her death.

A Cubbington upbringing, marriage, and emigration

She was born Annie Shaylor in 1869, in Cubbington, Warwickshire. She trained for three years to become a nurse at Warneford Hospital, graduating in 1885, then working there until her wedding. She married Fredrick Saunders about 1890, he listed his occupation as a publisher. They were blessed with two children, Ralph who was born in 1893 and Raymond in 1895.

The family emigrated to Canada arriving in Halifax, Nova Scotia, on Mar. 29, 1906. It required a further eight days to arrive in Cobalt. There were no roads south to connect Cobalt to Toronto and the rest of the world, until 1927. The railroad or boat and horse drawn wagon were the only ways to reach Northern Ontario. However the water routes were impassable for six months of the year, when the lakes froze over in winter.

Annie’s brother was there and he had encouraged her to come to recover from ill health. Cobalt at the time was big international news. One of  the largest discoveries of silver ever seen in the world had occurred in Cobalt in 1903, and this success would last into the early 1920s. Annie’s husband decided to try his luck at silver mining.

Cobalt is a unique town, it didn’t exist before silver was found. The discovery stimulated the rapid development of a settlement. However the town had unique challenges as all the land in and and around the town was owned by mining companies, and these companies did not allow construction of any municiple infastructure. They wanted to maintain control of the land in case there was a rich silver depost under every acre.

When Annie arrived none of the homes or businesses had running water or sewers. Most people lived in a one room cabin, boarding houses, miners bunkhouses, or tents, even in the winter. There were numerous businesses and stores to cater to this large population but there were few roads in town and those that did exist were either frozen or muddy, requiring everyone to wear boots 12 months of the year. Women had to walk holding their skirts up high to keep them out of the mud. A one room school had just been built and the first class started with 12 students and rapidly exploded to 100 children, resulting in many having to sit on the floor. However there was not a hospital in 1906 when Annie arrived.

By 1905 the lake was already polluted, so water was obtained from rain barrels, melting snow, or purchased through water carriers who brought water in from a neighbouring lake. Sanitation was non existent with mines, mills, homes and businesses all dumping their waste into the streets. This was before people understood the connection between the lack of hygiene and illness.

At its peak there were 100 mines in and around Cobalt including right in the centre of town, and at this time, there were no laws controlling the storage of dynamite. Barely six weeks after her arrival Annie heard the urgent call for her to vacate her house and run to safety, it was May 18, 1906. A forest fire had spread to a dynamite magazine located close to town. The fire ignited the magazine causing 7-10 tons of dynamite to explode. Annie was lucky to get out in time. It left many people homeless including Annie and her son. They lost everything they had brought from England. At this point, then, the choice to leave Warwickshire had lead to hardship. Annie was soon to find her calling, however, and her later time in  Cobalt will be explored in the next article.