You are here: Home>Locations>Bubbenhall>Straight-tusked Elephants in Warwickshire 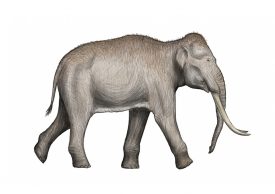 Reconstruction of a straight-tusked elephant.
Image by DFoidl. originally uploaded to Wikipedia 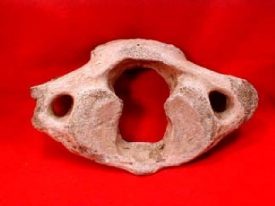 Parts of central and eastern Warwickshire are well-known amongst geologists and the quarry industry for patches of ancient sand and gravel, the half million year-old deposits of a long-lost river, the ‘Bytham River‘ or ‘Proto-Soar’. This river had its source close to where Stratford-upon-Avon is now, and its path travelled through the Midlands during the first half of the Pleistocene period.

A source of aggregate

These deposits have been quarried as a source of aggregate, notably in the Bubbenhall area to the south of Coventry. Amongst archaeologists, these deposits are famed for producing handaxes made of far-travelled volcanic rock, attributed to our human ancestors Homo heidelbergensis.  Interestingly, the very same deposits are also well known for the fossil bones and teeth of extinct straight-tusked elephants, known as Palaeoloxodon antiquus.

These animals were closely related to modern Asian elephants, and are thought to have died out about 50,000 years ago. There is no direct evidence from our county for Homo heidelbergensis hunting these animals, though interesting evidence has been found elsewhere for coordinated hunting and butchery. The University of Southampton, for example, has conducted research that offers the suggestion that these early humans were able to work together in groups to hunt and slaughter animals as large as this elephant.

The bone featured on this page in the photograph is a neck backbone of a straight-tusked elephant, from the now infilled Wood Farm quarry, near Bubbenhall. It can be seen on display at the Market Hall Museum, in Warwick. More fragile bones such as skull bones are only rarely found, suggesting that after death, the elephant remains spent some time weathering on land surfaces or being rolled around by currents in river channels, before being finally entombed in the river deposits.