You are here: Home>Locations>Southam>Southam's 'Little Trace' 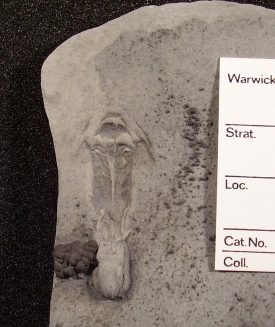 When in work, until about ten years ago, Southam Quarry was a fantastic resource for geological investigations. The ‘Blue Lias’ clay and limestone layers were a rich source of fossils, representing the remains of 200 million year-old sea-life that inhabited the Early Jurassic sea.

Some of the limestone layers, representing ancient sea-beds, had been visibly churned up by a variety of invertebrates, sometimes leaving recognisable fossil burrows (known as ‘trace fossils’) like those seen on modern mudflats and sand-banks.

Other layers almost completely lacked these structures and had been deposited probably under oxygen-poor, stagnant conditions. Over a series of visits to the quarry between 2000 and 2002, I discovered a number of unusual trace fossils in a seam of black shale exposed near the base of the quarry. Interestingly, these traces appeared to have been generated by small shrimp-like crustaceans, swimming above and occasionally touching down on the near-stagnant sea-bed. The shrimp-like animals, measuring just a few centimetres in length, appear to have been swamped by a thin layer of silt, but had escaped by burrowing upwards from their silty tomb.

These elegant little trace fossils are a new species, formally named and published as Solusichnium southamense, in 2009. Translated,  this means ‘only little trace from Southam’, referring to their isolated occurrence in the depths of the Southam Quarry.