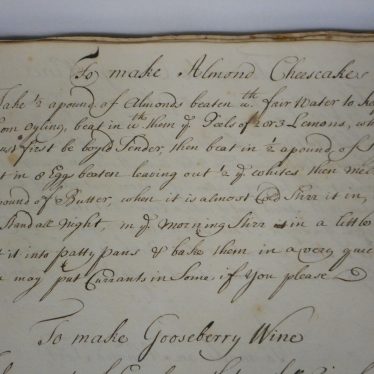 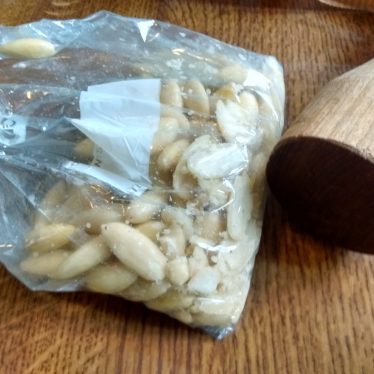 Blanched almonds slipped from their skins and ready for grinding or in this case, bashing.
Image courtesy of Sam Collenette 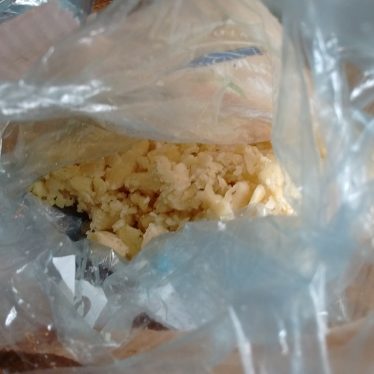 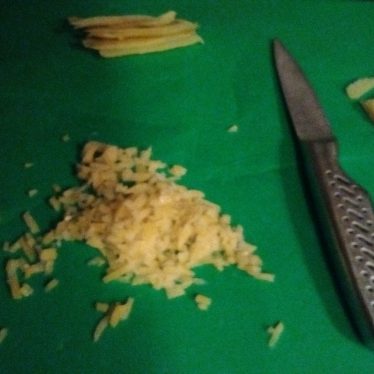 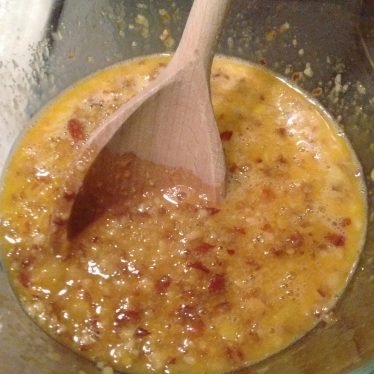 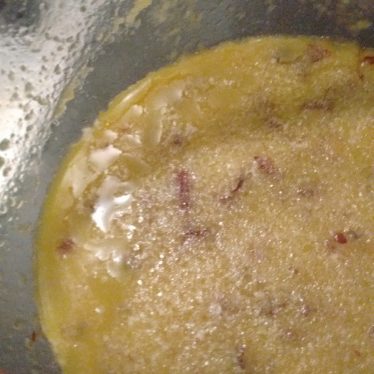 And now the next day with butter added

My heritage recipe challenge was to tackle this delightful invention found in the Wise family records.1 The 18th century writing is clear and the instructions quite simple and not too daunting.  It also thankfully didn’t have any cheese, just a bit of cream added at the end. As it was straightforward it seemed churlish not to at least try and enter into the spirit of things and understand something of what the process of grinding almonds must have been like.

I bought whole almonds, which in the 18th century presumably might have involved having them fresh, still in their pods. I blanched them and was surprised how easily they slipped their skins – it was a bit like podding broad beans. I decided to leave some with their skins on to try a variety of colours and textures in the finished cakes. The next step was to bash them with a handy (and clean) wooden dibber.

The recipe said to do this in fair water to prevent ‘oyling’.  Researching fair water seemed conclusively to mean pure water. I tried this by damping the almonds as I beat them. It wasn’t altogether successful though, as the almonds began to shine noticeably.

I boiled the lemons and sliced the skins; this was pleasurable and was certainly an improvement on adding zest with a grater. It was difficult to imagine how finely the person following the recipe originally might have sliced these though. I diced them, and they did melt into the cakes quite well whilst still giving some flavour. The boiling definitely took out some of the colour and taste of the zest, despite me adding the juice of the lemon too.

Adding the sugar and the eggs was quite straightforward, as was the melting and cooling butter stage. Leaving the mixture overnight, it was incredible to see how the butter thickened the batter as it cooled. It makes perfect sense when you think it through and it’s a technique I’ll definitely use again. Adding the cream thinned it slightly, but it didn’t need too much to loosen it up enough.

What are patty pans?

Researching patty pans brought up a huge array of different types of tins, ceramic basins, and bowls. I decided to play it safe and got some small fluted tins with removable bottoms and used a couple of cake tins. After cooking the mixture in a hot oven 180 degrees C for 20 minutes the cakes came out, and once cooled looked really tempting. They were light and fluffy and the randomly sized almonds helped add a delicious crunch, especially those with the skins still on.

I’d used regular ground almonds too as a control, and as a back up in case the ‘dibber bashed almonds’ didn’t work at all. These were much less successful – slightly bland, and with a lot less texture. As a recipe, and moreover a gluten-free recipe, it was a real success. And it made enough cakes (about 12) to feed hungry record office staff and volunteers.

One of the tasting team said it was a recipe for modern tastes. I think it needed more lemon but I won’t argue.