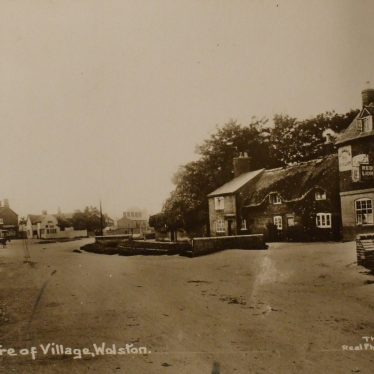 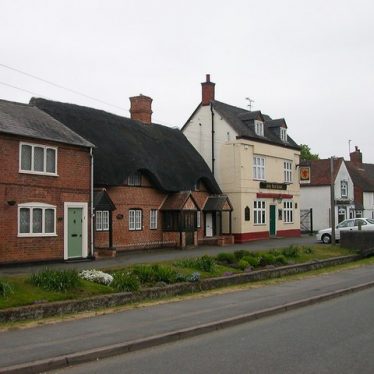 The brook separated the Red Lion and cottages from Main Street.
Image © Ian Rob. This work is licensed under the Creative Commons Attribution-Share Alike 2.0 Generic Licence. 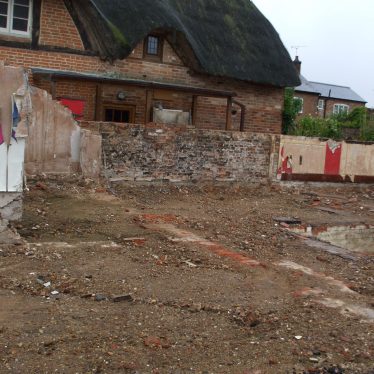 The Red Lion site September 2015. Not much left, but a view of a cottage not seen for a good while!
Photo by Benjamin Earl.

The Red Lion has recently been demolished, bringing to an end a staple of Wolston’s village centre. A Mr. T. Walton1 recounted his memories in the early 70s, and remembered the building and its surroundings.

[The pub is] a very different place to my boyhood days. It has been modernised along with all the other Wolston inns today. The Red Lion now has a car park. To make room for this, two old cottages were pulled down and this space together with their gardens and some other ground brought into use made this car park. Both the Red Lion and Rose & Crown [opposite] had large skittle alleys, and matches were arranged with other village pubs.

The… [cottage] next to the Red Lion was for many years a boot and shoe repairers owned by a Mr. C. Fields… Although he had lived here all of his life, he misjudged, in some way, the Brook which was full to the brick top. He got in and was taken down by the flow of water, however he was able to hold on to the side just before the Church field entrance of the Brook. He called for help; someone heard him and Mr. A. Kelsey answered together with Mr. J. Jenson (butcher)… Taking a lantern they hauled him out, but unfortunately he had caught pneumonia and died.

1 Originally published in the folder Tales and Images of Brandon, Bretford and Wolston, compiled by Geoff Henman and Nick Wongsam. A copy is available to consult at Warwickshire County Record Office, reference PH1213. This was published by the Brandon, Bretford & Wolston History Group, and is used with their permission.