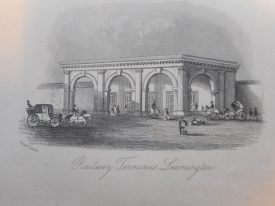 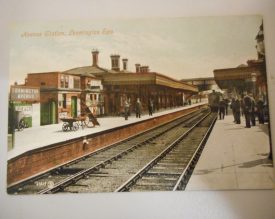 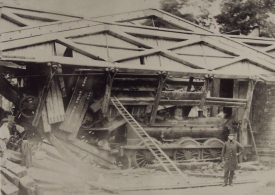 With today’s interpretation of the Health & Safety laws it is easy to forget the rather laxed attitude towards H&S that prevailed in times past. Unfortunately, this was an attitude that sometimes had serious consequences, with the accident that occurred at the Hill Wootton railway bridge being a case in point.

While the railways have always been fairly heavily regulated, during the rapid expansion of the mid 19th century, when the various railway companies competed with each other to add mile after mile to the network, these regulations were often ignored in the race for profit.

The railway arrived in Leamington Spa in 1844, when the London & North Western Railway (LNWR) ran a branch line from Coventry. Originally this line terminated at a railway station which stood on the corner of what is now Rugby Road and Old Milverton Road. In 1851 the line was extended to re-join the company’s main line at Rugby. A further two stations were built in Leamington, one on the viaduct that carries the line across Warwick New Road, and one behind the present station – on land that is presently a large car park. It was this station, called Leamington Avenue, that became the LNWR’s main station in the town; the one on the corner of Old Milverton Road became principally a goods station and locomotive depot.

The scene of the accident was the bridge that carries the line across the Hill Wootton Road. Despite being designed by Robert Stephenson (who was responsible for such engineering triumphs as the Britannia Bridge which carries the railway across the Menai Straight) the bridge was never thought up to the task. It became infamous locally for the way it would sway and emit a loud low rumbling sound every time a train crossed it.

When the bridge was built, the weight of the locomotives it would be expected to carry would have been around 10 tons. However, this increased rapidly over the next 17 years. The one that crossed it on the fateful morning of the accident weighed around 30 tons. Add to that the weight of the tender, and at the point where both engine and tender were on the bridge it was carrying around 50 tons.

However, the design was such that this weight would have been distributed evenly across the structure of the bridge. So in theory it should have been more than capable of bearing this extra weight. Unfortunately, when one beam failed the strain on the remaining beams was too, great and the whole structure gave way.

As was the case in those days the local newspapers went in to great detail, reporting the goings on at the inquest, which was held at the Warwick Arms Hotel, in great detail. This included some very technical details of the bridges construction and maintenance etc. However, the main conclusion was that had the cast iron beams been replaced with wrought iron ones (as had been recommended some four years earlier) the accident would never have happened.

The beam second from the Leamington end of the bridge was singled out as having been of very poor quality. Plus when it was found to have a crack in it, instead of replacing the beam, it was simply patched to save money. For this reason, along with years of poor maintenance, it was suggested that when the inevitable did happen it should have come as no real surprise to the company…