You are here: Home>Locations>Coventry>Pubs, Clubs, and a Changing Coventry City Centre 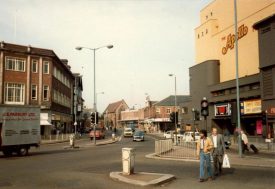 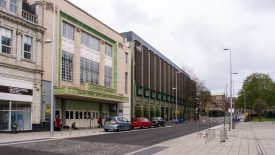 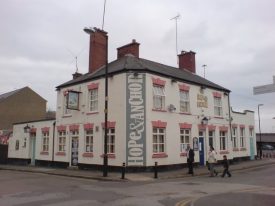 The Hope and Anchor, just before demolition in 2009.
Photo © Keith Williams (cc-by-sa/2.0). Originally uploaded to geograph

I do still go round Coventry city centre, which has changed a bit from my time as a student. The old fire station is still there, by Pool Meadow bus station. They used to have a covered market there some days, and opposite there was what I knew as the Apollo Theatre; although I never saw anything there,  they had a shop at the side which I used to buy concert tickets from. On the opposite corner from that was a pub/hotel called the Smithfield, where some of the students from the polytechnic used to lodge. We used to play pool in the bar there – there were several pool tables and the bar had large black and white images of old time film actors and actresses around the walls. A few doors down from that was a Swiss restaurant.

Opposite Pool Meadow bus station, on Fairfax Street, was a row of shops, which included a sewing shop, a café, a large newsagent and Fishy Moores Fish and Chip shop. That all disappeared though when they redeveloped the area, although Fishy Moores did move for a while to the City Arcade.

The pubs and night clubs in the city centre included the Dog and Trumpet (you went downstairs there) and a nightclub called Busters (you went upstairs there!). There was a cinema called the ABC where I remember seeing the “Killing Fields” and “Conan the Destroyer”. Another pub, which there seems to be no sign of now, was the Silver Sword (or the Dirty Dagger, as it was nicknamed).

Whitefriars Street has changed out of all recognition. On opposite corners were the Sir Colin Campbell pub, I think that  was once called The Scream (it has been renamed again! It’s now the Phoenix), and a newsagent called Joker’s Corner. Next to Joker’s Corner was the Odeon cinema (now part of the university) and next to that was the Godiva Inn… or the Dive as we knew it. You went downstairs to get into it and I think that it now part of the university. If you went down Whitefriars Street there was a bistro on the right and at the end, on the left, was the Hope and Anchor pub, which sadly has since been demolished. Beyond that was a pay and display carpark.

As the evenings got lighter you had to watch out for the starlings which used to roost around the polytechnic. They used to fly around in large flocks and you had to watch that you did not get hit by anything coming from them as they flew overhead. Security guards used to sound sirens to scare them off. All it did though was to make them fly around even more!

I was at Coventry Polytechnic for a second time from September 1987 to June 1991. That time I lived down the Bull’s Head Lane, off the Binley Road. I have not got too much to add to that, but if you were going into the city centre, down the Binley Road, there was a music venue on the right, just before the railway bridge, called, The Stoker.