You are here: Home>Locations>Nuneaton>The History of the Dugdale Arms, Nuneaton

The History of the Dugdale Arms, Nuneaton 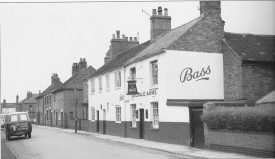 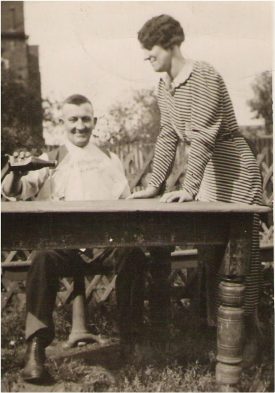 Jim and Nell Hope, landlords of The Dugdale Arms, Nuneaton. Nell was landlady until her death in 1957
Photo courtesy of Margaret Eastham 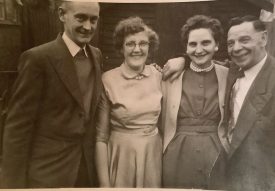 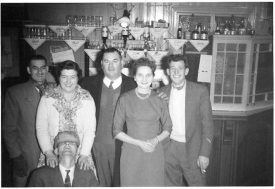 Madge Hope landlady at Dugdale Arms Nuneaton. Madge is 2nd from the right. On her left is Elsie Hartlett who always helped in the Bar, serving drinks and clearing up. Her husband, Tom middle back.
Photo courtesy of Margaret Eastham

I grew up in the Dugdale Arms, Nuneaton. Our family had run “The Dug, or The Duggie”, as it was known, since 1911, but its history extended further back than that, as I discovered when I began to research my family history.

The Dug was a traditional public house, in Dugdale Street, in Nuneaton town centre, within walking distance from the Council House, the Town Clock, the Market and the Cattle Market. Photos of The Dug show it is actually two houses, one being a much smaller building, to the left of the larger building.

Early history of The Dug

I used the Census to research the early history of The Dug. In the 1860s, the houses around The Dug were mainly small terraced houses, with entries to the back yards and outside lavvies, apart from two well designed houses either side of The Dug.

In the 1861 Census the building that became The Dug was simply a private house. By 1871 the Census listed a Beer House on Dugdale Street and named James Laughton, aged 52, as the Publican, with Martha his wife, aged 52. In 1881 the Census continues to show the Laughtons at their house in Dugdale Street, now known as The Dugdale Arms. By 1891 Martha Laughton now 72, was listed as a publican and widow. The 1901 Census sees Thomas J May as Beer House Keeper, as Martha Laughton had died between January and March that year.

Our family: owners of The Dug

It is not clear how long the Mays were in The Dugdale Arms but by 1911 our family were running The Dug. The first publicans were Willoughby Marston Nixon and his wife, Ellen. They are mentioned in the 1914 Electoral Lists for Nuneaton and by 1916 Willoughby was listed as a Beer Retailer in Kelly’s Business Directory at 80 Dugdale Street.

The Nuneaton Electoral List 1920 shows they were still living there. In the adjoining cottage was James (Jim) Hope, his wife, Ellen (Nell), and son, Leonard. Ellen Hope was Ellen Nixon’s niece. All three would later become licensees in their turn.

The Nixons spent their lives running the Dugdale Arms. In 1936 Willoughby Nixon died. By 1939, Ellen Nixon had moved to another house in Dugdale Street and Jim and Nell Hope, together with their son Leonard (Len), had moved into The Dug to continue the family business.

A passing of the tenancy

Jim Hope died on 8th February 1946 from a heart attack. Nell continued running The Dug until her death in 1957, when the tenancy passed to their son Len and his wife, Marjorie (Madge). Len died in 1959 and Madge continued the family business until The Dug was demolished in 1964.

This is where I come in. I am the second child of Len and Madge Hope. I was born in 1948 and christened Margaret Hope. My brother, Michael, is 4 years older than me. I have many happy memories of our life in Dugdale Street helping to run the family pub.