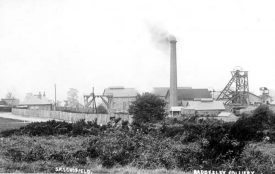 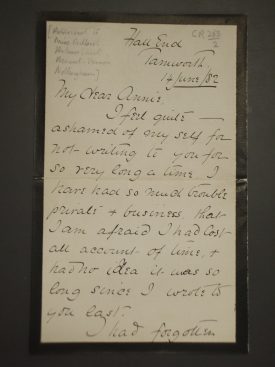 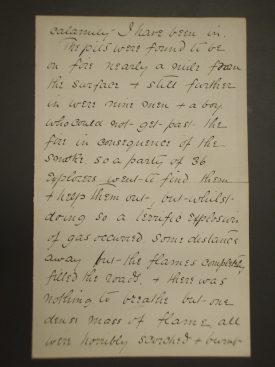 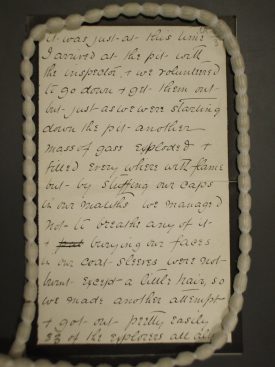 Warwickshire has a long and proud heritage of coal mining, with the Warwickshire coalfield extending across the county from Warwick to Tamworth. Towns such as Bedworth owe much of their social and economic development to the mine industry, and the collieries and their workers are inextricably linked with local identity. Baddesley (also known as Baxterley) Colliery was situated in Baxterley, close to Baddesley Ensor. The first shafts were sunk in 1850 by the Dugdale family of Merevale Hall, and the mine was a prominent part of the area until its closure in 1989.

In 1882, a fire at the colliery led to nine workers being trapped underground by the fire, and a rescue party was dispatched to help them. An explosion followed, resulting in great loss of life. Frederick Marsh wrote to a Miss Gilbert in Nottingham on 14th June 1882 and gave an account of the disaster, an extract of which is transcribed below.

Transcription of part of the letter

…still further in were nine men and a boy, who could not get past the fire in consequence of the smoke, so a party of 36 explorers went to find them and help them out, but whilst doing so a terrific explosion of gas occurred, some distance away but the flames completely filled the roads, and there was nothing to breathe but one dense mass of flame, all were heavily scorched and burnt it was just at this time I arrived at the pit with the inspector and was volunteered to go down and get them out but just as we were starting down the pit another mass of gas exploded and filled everywhere with flame, but by stuffing our caps in our mouths we managed not to breathe any of it, and burying our faces in our coat sleeves were not burnt except a little hair, so we made another attempt and got out pretty easily. 33 of the explorers all alive could not possibly be alive so we closed them in and shut up the pit where they will be for some some weeks yet, as well as 11 horses that were burnt, it was the most sickly sight to be imagined.

Further in the letter one particular sentence jumps out as showing the scale of the disaster, and the impact on the local community. It says simply, ‘there does not seem to be a single woman in the whole district round who is not in mourning’. Two memorials to the men who worked in the mine stand in the village, the winding wheels of the pit serving as a reminder of a different era that, although the landscape may change drastically from the time when coal was king, the memories stay strong.

Also see the following page, detailing a website dedicated to the disaster.