You are here: Home>Locations>Warwick>Then and Now: The Lord Leycester Hotel, Warwick

Then and Now: The Lord Leycester Hotel, Warwick 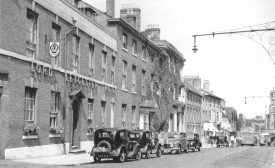 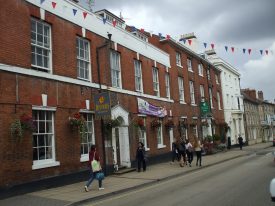 The Lord Leycester Hotel is in the news at the moment, after proposals to turn the hotel into a number of flats, with houses built at the rear. The building’s history is substantially older however. The site incorporates the eastern part of the former Jury Street House which was built in the early 1600s. This house is said to have played a role in halting the spread of the Great Fire of Warwick, while its history as a pub stretches back to the 18th century.

This pub was recorded on the 1806 map of the town as being at 19 Jury Street which was on the North side of the street. The house had been split in 1800 into two, 17 and 19 Jury Street. It’s owner was Lord Archer. Kemp in his “History Of Warwick” published in 1905 also referred to this pub at this address adding that the buiding was also called “Mornington House”. In Tallis’s list of Warwick Pubs is mentioned a pub of this name existing from 1788 – 1800 at a similar address which was then reported to be part of Lord Leycester Hotel.

This assertion is confirmed by an entry in the Victoria County History which states “Jury Street House was built by one of the Wagstaffes of Tachbrook and was later owned by John Rous… The Lord Leycester Hotel now incorporates part of the house.” The house had a number of owners and a chequered history before becoming the Lord Leycester Hotel.

The first reference to this hotel in the trade directories is not until 1926, after A.H. Tyack had bought 19 Jury Street in 1925. By 1927 he had bought number 17, so making the house one again. Only three licensees are listed for the hotel up until 1961. The hotel was requisitioned during the second world war, and was also used by the US Army.

The text for this page is a revised version of that originally published on the History of Warwick Pubs website.