You are here: Home>Locations>Nuneaton>The Prince of Wales Theatre in Nuneaton: Part Two

The Prince of Wales Theatre in Nuneaton: Part Two 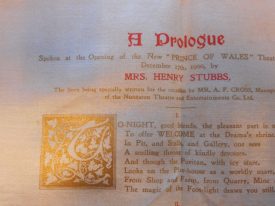 A close-up of the poem from the Prince of Wales theatre, Nuneaton.
Warwickshire County Record Office, document reference CR2884. 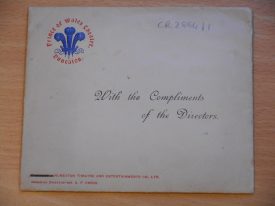 The envelope containing the poem. 'With the Compliments of the Directors'.
Warwickshire County Record Office, document reference CR2884.

In the first part of this article I discussed the history of the Prince of Wales theatre, Nuneaton, from its opening night to its demolition. Now we shall have a further look at the poem that was produced from that opening night, and what it tells us about how theatre was perceived at that time.

The poem (written by the managing director Mr Cross) tells a fascinating, and perhaps one-sided history of theatre. There is an emphasis on the legacy, appeal, and unifying quality that theatre has.

The poem tells us that theatre audiences can be drawn from far and wide, from ‘Shop and Farm, Quarry, Mine and Mill.’1 People from varying backgrounds and occupations can come and enjoy themselves together; theatre is a unifier. Such equality can only go so far, however, because of money. The seats in theatres are divided by price, thus offering more enjoyable and comfortable experiences for more money. Theatre may bring you together, but only for those who can afford it, and those with more money may have a better time. All of the locations mentioned by the poet here are places associated with mostly working-class occupations, which suggests the audience was predominantly working-class too.2 In which case, although unifying for some, there are clearly people who remain undrawn to the ‘magic of the Foot-light’.

Mr Cross uses most of the poem to remind his audience of the great legacy that theatre has left to them. He describes how theatre was first inspired and influenced by the Church, mentioning the medieval mystery plays ‘that drew royal blood to Coventry’ and the Feast of Fools, a French festival where religious hierarchy was mocked and circumvented. Theatre then declines with the Reformation before booming again with Shakespeare, whose ‘fame outshines the mightiest potentate’. After Shakespeare has seemingly rescued English theatre from decline, Cross’s history ceases. There may have been logistical reasons for this – after all, Cross could not have mentioned everything, nor could he risk boring his first audience with an over-long poem. However it is still interesting that Shakespeare seems to indisputably be theatre’s saving grace; the proudest moment in English theatrical history.

The poem ends with an interesting argument, that as well as drama to illuminate us or to allow us to question ourselves, we need drama simply to ‘drive dull care away’. This question is introduced to us by a quote from Hamlet, when Hamlet organises a play in order to provoke a guilty reaction from his uncle, Claudius, who he suspects of murdering his brother, Hamlet’s father. Such a profound motivation for producing theatre is all very well, but Cross emphasises here theatre as escapism, as light relief and entertainment.

I for one feel that one of theatre’s great powers is that it can shock, and question,  introduce new experiences and stimulate empathy. But a mixture of both is preferable; people need to laugh too. What do you think? Do you go to the theatre or the cinema just to escape, or do you like the idea of being questioned or even disturbed by what you see?

2 As he mentions shop, quarry, mine and mill, we would naturally think of agricultural labourers, miners, quarry-men and mill-workers. Arguably shop-workers may have been considered lower middle class at the turn of the century.

This article is August 2016’s Document of the Month for the Warwickshire County Record Office. Further articles can be found on their website.