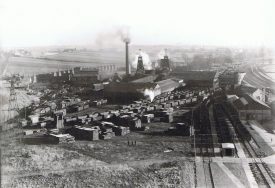 Haunchwood Colliery was founded by John Nowell of Wednesbury, Staffordshire. He had previously owned Oakwood Colliery at Wednesbury, which had traded under the name John Nowell & Son. Oakwood Colliery had been forced to close after its coal reserves were exhausted, leaving Nowell to look for a suitable site to sink a new colliery. He found the ideal site at Haunchwood, and began the process of sinking the new colliery, however he died suddenly of heart failure at the age of 46 in 1851. The sinking of Haunchwood Colliery was then managed by Nowell’s son, William, who decided to retain the old company name of John Nowell & Son.

Production at the colliery began in 1855, using a system of skip winding to bring the coal to the surface. This practice was a dangerous one, and often resulted in the death of the boy whose responsibility it was to push the drawbridge trolley over the shaft and uncouple the skips once they were full, as the job required the boy to step over part of the open shaft several times each time the skip was emptied. In 1858, Haunchwood Colliery adopted single deck cage winding, and accidents involving young boys falling down the shaft ceased.

By 1873, the colliery was on the verge of exhaustion and was reduced to extracting the old pillars of coal that had been left behind in its earlier districts. To extend the life of the colliery, it was decided to extract coal from down the dip. A new method known as the Gillett system was implemented, allowing the colliery to save the expense of sinking a new drainage shaft. Other collieries in the coalfield had opted to use this new system after bringing in the consultant engineer, Gillett, to install it, however at Haunchwood William Nowell designed and installed the system himself.

William Nowell died suddenly of heart failure at the age of 47 in 1874. His 18-year-old son, also named William Nowell, became the colliery owner. William Davis was appointed as the colliery manager, and also fulfilled the job of colliery agent. William Nowell left the colliery for seven years to obtain his engineering qualifications, eventually returning in 1881 as a qualified engineer and manager. He returned to find that William Davis had drawn up an investment program that would increase productivity and bring the colliery up to the standard of that time.

Neither Davis or Nowell were able to raise the capital required for the investment, and Nowell put the company on the market. Nowell retained 49% of the shares, however many were given in exchange for further mineral rights, and the rights for the whole of Galley Common were acquired. The new company was named Haunchwood Colliery Company, and one of the leading shareholders was Sir Alfred Hickman, who became the managing director. As a result of this investment, the average output of the colliery trebled.

A third bout of heart failure

In 1906, William Nowell died suddenly of heart failure at the age of 49. Three generations of Nowells had now passed away due to heart failure before reaching the age of 50. Sir Alfred Hickman died four years later, and his interest passed to his three sons. By 1912, the colliery employed 417 men underground and 118 on the surface, however its coal reserves were diminishing. Meanwhile, Haunchwood Colliery Company had opened a new pit known as Tunnel Pit in 1892. By 1895, this colliery employed 817 men underground, becoming one of the largest collieries in the coalfield at that time.

Haunchwood Colliery closed in 1967, but its pumphouse was retained for pumping purposes, as if the workings had been allowed to flood it would have been a potential danger for Newdigate Colliery, as only 50ft of coal separated the two underground. When Newdigate Colliery closed in 1982, pumping at the Haunchwood Tunnel shaft became unnecessary and ceased.