You are here: Home>Subjects>Arts>Cinemas and Theatres>What's on at the Scala, Nuneaton?

What's on at the Scala, Nuneaton? 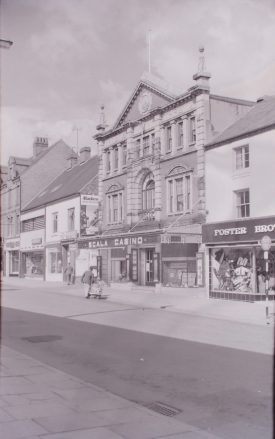 According to the Nuneaton Chronicle of November 2nd 1951, you could see Robin Hood of Texas. Now, I thought I knew my myth and legend, but I don’t know this version! Starring Gene Autry (his final film for Republic Pictures), IMDB give a rather enigmatic description that “a gang of bank robbers arrive at Gene’s ranch. Gene winds up chasing them around the west.”

I’m still none the wiser!

So, did anyone see it, in Nuneaton or elsewhere? Have I missed out?

The …Chronicle is a bit more fullsome in its description of the other lead film of the week. Two Lost Worlds sees a clipper race to the Dutch East Indies “to pick up a valuable cargo of teakwoods, silks and spices.” I’m sure there are plenty of twists and turns in the film itself. Support movies for the week, meanwhile, are Webb of Danger [sic], and Home to Danger – clearly a lot of danger around Nuneaton that week!

The Scala’s fate appears to have been ragged. Damaged by German bombs in 1943, The website ‘Cinema Treasures’ reports that its last films were shown on 27th August 1977. I hasten to add that I have seen neither The Sexorcist nor Waves of Lust!

As can be seen in this photo by Reg Bull, the Scala then became a casino. With its first film shown in 1915, we’ve just about got this page out for the grand dame’s centenary – it’s certainly a distinctive building.

Follow the link for more photos of the Scala, contributed by Nuneaton Memories.