You are here: Home>Locations>Nuneaton>The Last Days of the Dugdale Arms, Nuneaton

The Last Days of the Dugdale Arms, Nuneaton 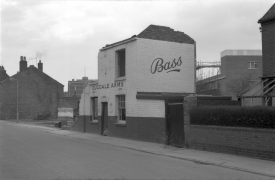 The Dugdale Arms in Nuneaton had been in my family since 1911.  My mum and dad took over as landlords in 1957, having lived next door to The Dug (as it was known) before then.

A door led from the bar, downstairs to the cellar. Crates of bottled beer and lemonade were stored in the first room. This led down again to a proper cellar where the barrels were allowed to stand before being tapped and connected to the pumps up in the bar. A trap door at the far end allowed the barrels to be rolled down. These barrels were delivered by horse and dray, dropped onto sacks on the pavement, then rolled down the outside passageway to the trap doors. Later these were delivered by a lorry.

This cellar was always cold, ideal for conditioning the beer. Specially made, I can only assume, when The Dug was built in the 1840s. The cellar in The Dug had a raised area all around where the barrels were stored, on their sides, slightly at an angle, ready to be connected to the gleaming brass pipes which were connected to the pumps. The raised area had a specific purpose. The Wem Brook flowed under Nuneaton town centre, under The Dug. When the cellar was constructed a pump had to be fitted so that when the Wem Brook flooded, the water could be pumped out! This was often the case. The cellar was consequently always the right temperature and humidity for keeping ale.

Children were not allowed in the pub. However when it was cold, mothers and children packed themselves in the area of the living quarters, called « The Kitchen ». Pop and crisps were the treats. All the children were well behaved. On a summers day, mothers and children ( and sometimes the men folk) would sit outside in the yard. Tables and chairs were plenty and there was the covered area should it rain.

Often the children were treated by one of the customers’ who would buy them all a packet of crisps or an ice cream from Di’s at the end of Dugdale Street, on Queens Road.

A brief history of The Brewery.

A company called Eadies had built the premises in the 1800s. A register of Deeds & Mortgages listed The Dugdale Arms and Cottage. The Debenture Trust of 23/11/1896.

They were one of the earliest pioneers of tied houses let to tenants as distinct from the ordinary tied-house system.  The James Eadie company grew successfully from its establishment in 1854 and continued as a private concern until it was registered in 1893.