You are here: Home>Locations>Nuneaton>A Rural Boyhood in Nuneaton

A Rural Boyhood in Nuneaton 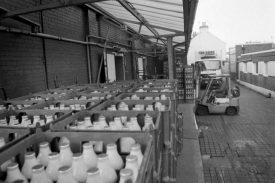 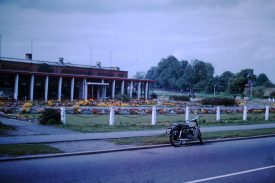 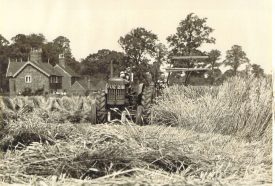 From the age of about nine I started work on Cresswell’s milk round belonging to two brothers, Bill and Dick, who had a farm at the top of Higham Lane. I used to get up on Saturday and Sunday mornings, make mum and dad a cup of tea, take it to them in bed and then walk to the farm. I helped milk the cows, by hand at first, then take the churns to the dairy. The milk then went through the cooler, was bottled and put into crates each holding twenty bottles. The bottle tops were originally cardboard before eventually changing to metal tops. The crates were then loaded into the van for delivery.

When I was about 14 I was allowed to drive the van, and when Bill stopped for a cup of tea in Niton Road I used to finish the round in Kingsbridge Road. On one occasion after finishing the deliveries I drove round the bend at the top of Ryde Avenue too fast and the empty crates slid from one side of the van to the other and the van tilted! Needless to say I was more careful after that. We always carried some spare clean bottles and tops, and if we ran out we used to go to the Co-op dairy in Merevale Avenue.

The dangers of bottling milk

Bill would get the milk in the milk bucket and we would bottle it for delivery. On the way back Bill would call in the Bentley Road Club for a pint (I got lemonade) and then I had to drive back to Weddington through the Saturday market! When back at the farm we washed the bottles and put them in the steam cabinet to sterilise them. The steam cabinet was fed from a boiler in a lean-to next door. This was fired by wood and coke. An oil-stained bottle was kept in there in case the boiler wouldn’t ignite. The bottle was filled from one of two tanks in an adjacent building. One day the boiler wouldn’t ignite so I took the bottle and filled it from one of the tanks. I poured it on the wood and coke and bent down to put a lit match to it. It suddenly burst into flames and my face got burnt. Bill took me home and mum took me to Ranby’s Chemist in town who dressed my face. Fortunately, after three or four visits, I was okay and had no scars. It was when I went back to the farm I found out that I’d filled the bottle from the wrong tank and instead of used tractor oil I’d thrown on paraffin!

I also used to stay on the farm some afternoons when they were harvesting. The cutter used to go down one side of the field and a man with a shotgun stood on the other side and when the rabbits ran out he would shoot them. No doubt it helped with meat being rationed. I also used to feed the hens and collect the eggs. They also had a bull at the farm with a ring in its nose. At mating time they used to lead the bull into the farmyard using a pole with a hook in the end to service the cows. The farm also had a field at the bottom of Higham Lane where Rugby Autocar now stands and the heifers were kept in this field. On one occasion one was about to give birth and I helped deliver it by pulling on its legs. When winter drew near we used to go to this field and drive the herd back to the farm along the road.

The end of the round

The Cresswells owned two farms, the one off Higham Lane was called Top Farm, run by Bill and Dick and Lower Farm off Weddington Lane. The boundaries of these farms met in the middle. Harry Cresswell the third brother had this farm. While I worked there Harry decide to finish at Lower Farm and Bill took over. Harry started Cresswells School of Motoring for learner drivers. Dick eventually sold the milk round to a couple, Stan and Beryl, and I worked for them for a while until they decided that didn’t need extra help. I didn’t get pocket money so the money I earned on the milk round was useful so when I left I did a Sunday paper round from Squires shop, which stood where the library is today, around Attleborough.

This piece is posted by permission of Jackie Sedgwick.