You are here: Home>Locations>Nuneaton>The Prince of Wales Theatre in Nuneaton: Part One

The Prince of Wales Theatre in Nuneaton: Part One 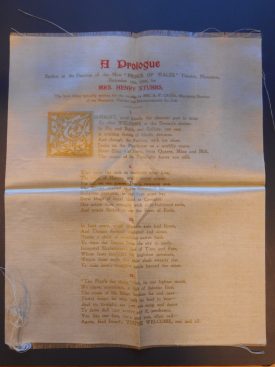 The poem printed on silk, commemorating the opening of the Prince of Wales theatre in Nuneaton, 1900.
Warwickshire County Record Office, document reference CR2884 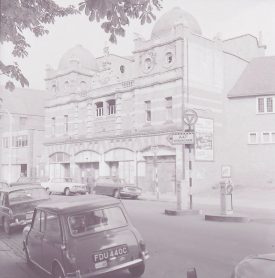 It has been a very theatre-friendly year, what with the 400 year anniversary of Shakespeare’s death, and having discovered this treasure at the Warwickshire County Record Office I thought it would be appropriate to reveal it here. The document in question is a small silk sheet, a souvenir commemorating the opening of the Prince of Wales theatre in Nuneaton, on 17th December 1900.1

Printed on the silk is a poem, written by the managing director of the theatre and recited by Mrs Henry Stubbs on that opening night over a hundred years ago. It celebrates a rising popularity for theatre at the time, and charts the rise and fall of drama since its inception.

Silk-covered playbills and programmes were produced from the 18th century onwards to commemorate theatre openings or special performances. Today audiences often keep theatre or show programmes, and they, although attractive documents in themselves, are nothing like as luxurious as being covered in silk, so one can imagine how special it would have been to be presented with such a souvenir.

In terms of preservation, silk is a trickier and less common material than paper to work with. There is less research about how to conserve silk, and efforts have been made to further investigate the causes of its deterioration. Light has traditionally been seen as the main culprit, but, according to a recent study by English Heritage, humidity may be a more dangerous factor.

The history of the Prince of Wales

The Prince of Wales  operated as a ‘variety theatre, with films screened as part of the programme’. It was a new breed of theatre, endeavouring to embrace the rising popularity of the cinema, as well as cater for traditional shows. It quickly kept evolving – by 1909 it had been re-named the Hippodrome Theatre, and entertained audiences alongside the Empire Hall and Skating Rink which had been built at the rear of the theatre – but by 1914 the owners had gone bankrupt. After operating as a variety theatre for many years, and undergoing technical upgrades in order to keep up with the continual rise of the ‘talkies’ and cinema, the Hippodrome was bought by Associated British Cinema in the 1930s. However, in 1937 ABC opened a new cinema in Nuneaton, the Union Ritz, and after this the Hippodrome’s popularity waned. It eventually closed in 1956 and stood empty, until a fire rendered it unsafe in 1968 and it was demolished.

This document then, is rather bittersweet, because for all the glory and wonder it describes, the theatre itself would cease to be in less than 70 years.

In part two of this article I discuss the poem in more detail and what it tells us about how theatre was perceived in the early 20th century.