You are here: Home>Locations>Stratford-upon-Avon>How Do You Watch Shakespeare?

How Do You Watch Shakespeare? 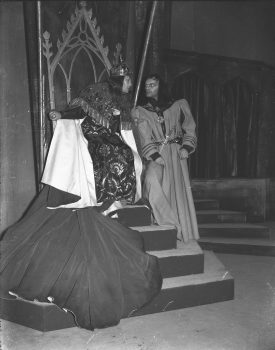 The audience cheers and applauds virtually every turn, whistles break out among the crowd as they show their support. Meanwhile, on another night, a firecracker is thrown as the anger at a poor performance threatens to simmer over. Elsewhere, a riot ensues and the militia find themselves having to fire into the crowd to restrain the baying mob unhappy at a performance. Twenty-two die, many more are injured. Boos ring out and the crowd stamp their feet, hiss and yell. Meanwhile at another performance, there are so many watching that they overflow onto the stage. The crowd interfere as they stand up for the underdog and protect him from the fight, they race across the stage with the soldiers, abuse the villains.

A change in reception?

Lawrence Levine writes that this is how Shakespeare was received by its early 19th century audience in America. Today, as the literary canon takes hold, we all know of Shakespeare, of course we do, and being in Warwickshire we surely cannot avoid Shakespeare (it’s not just Stratford where references abound: for years Coventry branded itself as “the city in Shakespeare’s County”). Shakespeare’s place in English Literature, however, means that he is treated with a reverence and respect; he can be the sign of good taste. A way to demonstrate learning can be to quote the odd line from his play, but what you don’t generally do nowadays is correct the actors if they get it wrong. And we all like Shakespeare, right? Well they certainly did in 19th century America. There, Shakespeare was the popular entertainment. Different times, of course, but there he was the mainstream much as, maybe, Coronation Street might be to a British audience of a few years back.

The Death of the Author?

Roland Barthes wrote of the Death of the Author, but Shakespeare shows this is anything but. We can watch his plays in Stratford, the place of his birth, and Shakespeare himself becomes the signifier. Shakespeare is Englishness, class, good taste; the use of his name evokes a reaction and everyone will have a view of his work, whether they’ve watched a play or not. Mind you, throwing rotten fruit at the actors performing at the Royal Shakespeare Theatre would probably not go down well with my fellow spectators in the present day.

What do you think?