You are here: Home>Locations>Warwick>The Dungeon in the County Gaol, Warwick

The Dungeon in the County Gaol, Warwick 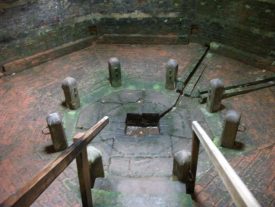 The Dungeon at the County Gaol.
Picture courtesy of Heritage and Culture Warwickshire 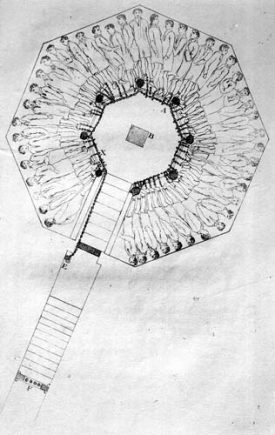 The Dungeon in the courtyard at the back of Shire Hall, Warwick. This drawing represents the crowded manner in which the prisoners had to lie, sideways with their feet attached to the chain, which was carried up the steps, through the door and padlocked. 1890s
Warwickshire County Record Office reference PH 196/p35.

The old County Gaol is the building next to Shire Hall, and was here until a new gaol was built at the Cape in 1860. After that part of the building was used for military barracks until the 1930s when they were moved to Budbrooke. Some cells were kept to be used when prisoners were brought to Shire Hall on trial days. This was only for the duration of the trial, they spent the night elsewhere.

The dungeon is an octagonal room 18’10” below ground, and the grill over the opening in the roof can be seen in the grassy part of the outside courtyard. It is now reached by 18 steps, although this was originally 31. It was constructed by the order of the Epiphany (January) sessions in 1680, and in the middle of the dungeon was a cess-pool for purposes of drainage. This was added shortly after completion.

It will be unsurprising to hear that conditions were not exactly five star standard. To add to the ordeal the dungeon was liable to flooding, as it was built over a constant spring. Fortunately for the felons, they were not in here all the time. It was used as their night room and would not normally have been used during the day, when the prisoners would have been in a normal room.

Measures to confine the prisoners consisted of the use of chains. Prisoners lay with their feet chained towards posts around the cess-pool, a long chain ran through the staples in the posts and through a link in the prisoners’ chain, and the restraint carried on up the steps, through the inner door and was then padlocked. If you look at the steps today, you can see where they have been worn away by the chain.

To add to the discomfort, when more than 40 prisoners were housed in the dungeon only a side lying position was possible. The most recorded as being kept in the dungeon was 59.

Some slightly surprising classes of prisoners were recorded. Its early use was for Quakers, Anabaptists and other “unorthodox folk”, whilst it was later used for deserters from the army especially during the Napoleonic wars.

The dungeon’s use declined over time. It ceased to be regularly used in 1797 owing to representations made by John Howard, the penal reformer, after a visit by him in 1776. Nonetheless, the dungeon was still used occasionally for army deserters.

Map marker in the right place? If not, please correct the map.
Locations
Warwick (1248)
Subjects
Crime and Civil Disorder (95)
Prisons and Reformatories (64)
Date