You are here: Home>Locations>Wellesbourne>Wellesbourne Mountford: The Red Horse Deed Packet 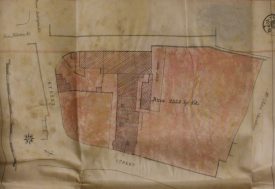 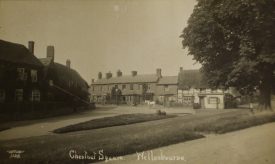 According to a typed written note inserted within the package of deeds, the enclosed documents were uncovered in an attic when the house was cleared.  Unfortunately the address of the house wasn’t given and the collection had been posted anonymously to Warwickshire Museum before subsequently being transferred to Warwickshire County Record Office in April 20151.

Probably subjected to damp or water at some time, the top layer of deeds had developed mould, and though now dry, some of the parchment membranes had stuck together in the creases.  Fortunately, it was possible to carefully prise apart each sheet.  A remnant of the surviving packaging gives the name [?] B Lucy Esq in a 19th century hand, and although the connection to ‘the Lucy’ family isn’t clear, it is known the Lucys of Charlecote owned numerous properties in Wellesbourne.

A rather pathetic story

From this small collection of records a rather pathetic story emerged.  It begins with Joseph Palmer, evidently owning the freehold to a messuage/beerhouse in Wellesbourne but mortgaging the property for £300 with interest in 1817.

Before his death in 1823, Joseph bequeathed his property to his eldest son, Thomas, and set aside sums of money for his wife and other children, the children to be in receipt of their inheritance upon reaching their majority.

It becomes apparent, reading through subsequent deeds that Joseph died leaving extensive debts.  Thomas inherited his property, but needed the support of his family to maintain it; their attempts were destined to be futile.  Thomas and family successfully fended off an action brought against Thomas and his mother, Martha, in Chancery in 1837, with the help of his solicitor, James Tibbits, but was declared a bankrupt somewhere between 1851 (see note re. tithe apportionment below) and 1860, with the property being sold to Mr William Scrubey around 1860.

Interestingly, though wholly expectedly, Thomas Palmer is named as owner and occupant of this piece of land and property in the tithe map and apportionment for Wellesbourne Mountford, 18512, hence it is unlikely he was a declared bankrupt at this time.  If we were to view only the tithe apportionment, we might assume Thomas was a fortunate and prosperous man.  This small packet of deeds, serendipitously finding a home at the record office, tells quite a different story.