You are here: Home>Locations>Warwick>Then and Now : The Lord Nelson, Emscote, Warwick

Then and Now : The Lord Nelson, Emscote, Warwick 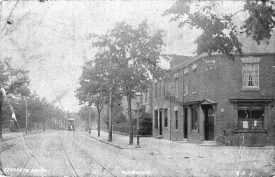 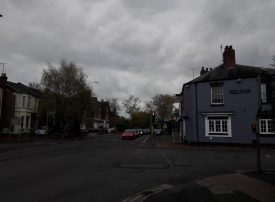 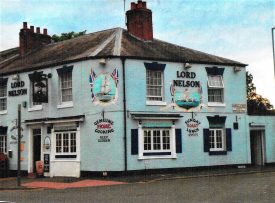 A nautical themed look for the Lord Nelson, which was also very evident throughout at this date (2013).
Image courtesy of Phil Bonehill

Originally called the Bee-Hive, this ‘beer house’ was situated on the corner of Emscote Road and Wharf Street. However, in 1898 this section of Wharf Street was renamed as Charles Street. Nelson Dale & co who then occupied all the buildings along the length of the canal in Wharf street as gelatine manufacturers constructed a road bridge over the Warwick and Napton Canal giving their employees easy access to Charles Street. It was here that the company built 16 houses for their workers which soon became known to as the ‘Nelson Village’ but the road itself was named Charles Street after George Nelson’s eldest son who had died prematurely in 1877 at the age of 43.

This pub was built in 1833 on land owned by the Earl of Warwick and leased out for a term of 99 years. But it’s not until 1846 that we can trace the first mention of a licensee, one Benjamin Collis listed as the beer house keeper. Interestingly in 1840, the Warwick Advertiser notes that the beer housekeeper of the Hop-Pole is one Benjamin Collis. This beer house was adjoining the Bee-Hive! “Benjamin Collis, beer house keeper -Hop-Pole” the adjoining property, later to be known as the Britannia Inn. Warwick Borough Sessions, Warwick Advertiser 24 October 1840.] Both pubs can be clearly seen on the 1851 Board of Health for Emscote.

However, by 1866 the pub had changed its name to the Lord Nelson Inn and the Innkeeper was James Tiso. According to Thomas Kemp, a local historian of the time, there had been a previous Lord Nelson in Emscote but the license was transferred from this house which was said to be situated further along the street.

In 1854 the Nelson family bought the lease of the pub and other buildings along the Emscote road from the Earl of Warwick, but on the death of George Henry Nelson, the second son of the founder, the leases were sold.2

In the Spennell’s street directory of 1880 the pub was listed as being at 13 Emscote Place, but after major renumbering of the Emscote area in 1881, the address became 31 Emscote road.

This typical Victorian corner public house has passed through more than 20 licensees. It is especially interesting to note that G.A White[1894] moved around a bit because two years after he left here he turned up at the Lion Inn at the corner of Monk Street and Crompton Street. It is also quite rare to find a pub passing from husband to wife and then probably to their son to keep the pub in the family for almost 60 years as happened with the Eales family. [1895-1955]

Some information has been taken from John Crossling’s History of Warwick Pubs website.

2 The Leamington Courier of 3rd September 1898 reported that on the death of George Henry Nelson in 1898 Margetts and Sons sell on behalf of the family, amongst other proprieties the ‘Lord Nelson Inn’ to Mr. Purser for £405. The 99 year lease was set to expire 1932.