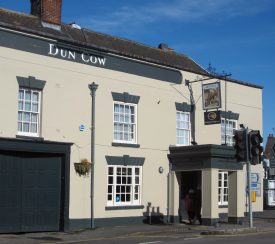 An interesting set of information survives in the 19th century court records: the calendar of ‘Victualler’s Recognizances’. These have been transcribed by volunteers at the Warwickshire County Record Office and can be accessed on-line.

Vouching for an innkeeper’s good behaviour

Innkeepers had to register annually, along with two people or bondsmen to vouch for their good behaviour. The publican promised before a JP to observe the licensing Acts and to maintain good behaviour in their alehouse. For the first few years, the name of the inn was often not recorded, but this changed in 1813. From then until 1828 we find the name of the inn alongside the name of the inn-keeper and the two bondsmen (or women) with their addresses and occupations. In larger places, the street is recorded. There was a great deal of mutual support so that bondsmen are often other local publicans. These records pre-date most trade directories and thus are particularly useful. Occasionally the records do not survive: a sad little note tells us that the Hemlingford Hundred records for 1805 were destroyed in a fire.

The history in pub names

Some inns record historical events: the ‘Waterloo Tavern’ appears for the first time in 1816 (a year after the battle where Wellington defeated Napoleon). Several ‘Navigation’ names were sited on the canals that provided an important transport network around Warwickshire at that time. Some names recall activities that are now illegal: there was a ‘Fighting Cocks Inn’ at Deritend in Aston; cockfighting was banned in England by the Cruelty to Animals Act of 1835. Some inns record the name of a local landowner (e.g. the ‘Holt Arms’ in Aston) or national heroes such as Lord Nelson or General Wolfe. We get glimpses of old trades: the ‘Canteen in the Barracks’ pub at Aston was run by Josiah Coley whose bondsmen (one a relative) were both pearl button makers. There was the ‘Weaver’s Arms’ in Nuneaton, reflecting a major local industry. The ‘Waggon Load of Lime’ at Arley demonstrates the use of lime as a fertiliser at that time. Some pub names have stayed the same: the ‘Dun Cow’ still stands in Dunchurch for example (see photo). However many others have changed their name over the years.

How to use the index

You can search the index to the victualler’s recognizances by parish, by the surname of those recorded, by year or by pub name. You can also do a ‘free text’ search, which might be useful to find pubs in a particular district of Birmingham for example. All these details can be accessed via the Warwickshire County Record Office web-site (just put ‘victuallers’ in the search field). Alternatively you can use a computer at the Record Office (and some local libraries); look for the ‘Licensed Victuallers’ icon. The original documents are not easy to use and don’t usually contain any further information than the on-line index. However if you want to look at them, the Record Office reference no. is QS 36/13-17 (the on-line index tells you which volume you need).