A Royal Wedding in Stretton on Dunsmore? 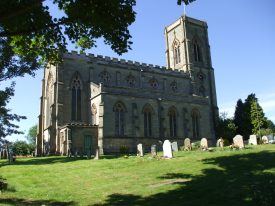 All Saints, Stretton on Dunsmore, 2014.
Photo by Benjamin Earl 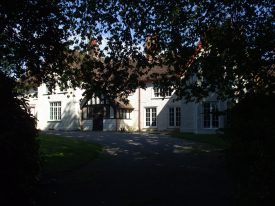 It’s a slightly misleading title, as it wasn’t really a Royal Wedding, but did you know that a relative of Queen Elizabeth II got married in the Parish Church of All Saints?

1893 was the year in which Patrick Bowes-Lyon married Alice Wilshire. Captain Arthur Lister-Kay had been Alice’s Guardian, and she had lived in the Stretton Manor House opposite the church.

The clue is in the surname. Patrick Bowes-Lyon was uncle of Elizabeth Bowes-Lyon, later Queen Elizabeth, later still Her Majesty Queen Elizabeth the Queen Mother. This, then, makes the couple who married in Stretton the great aunt and uncle of the present Queen.

Patrick Bowes-Lyon was also Wimbledon doubles champion in 1887, before he and his partner Herbert Wilberforce lost in the final the following year to the Renshaw brothers.

Linkedin
More from Stretton on Dunsmore
More from Births, Marriages and Deaths
More from Chapels and Churches
More from National Government, Sovereigns, and Heads of State